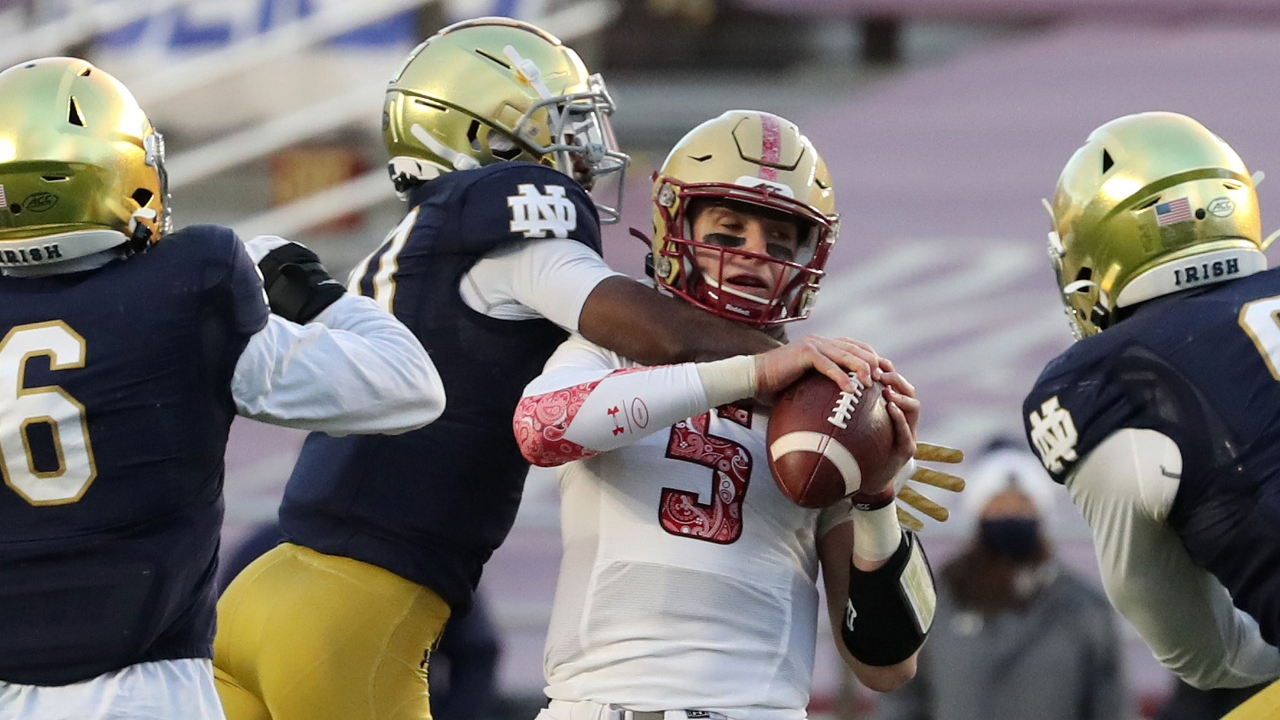 Photo courtesy of the ACC.

That’s how long it’s been since the Boston College football program had a legitimate break.

Coaches and players came back to begin quarantine in late June. Since then, the Eagles have had a few days off here and there, but it’s pretty much been five straight months of grinding. Aside from that, the Eagles have stunningly had over 7,000 negative Covid tests since that return, an accomplishment that deserves a reward itself.

So, while fans will be missing watching the Eagles fly around the field this weekend, the team is enjoying a well deserved break.

There was no media availability this past week (let’s be honest, they’re probably sick of us the most), but head coach Jeff Hafley did have his usual Sunday session following the tough loss to Notre Dame. We also had news break this week that BC actually has an extra week off now too, with the game against Virginia moving from the day after Thanksgiving to December 12.

“This is a well deserved break for a team that’s played nine straight games,” Hafley said Sunday. “Been here since June, hasn’t had a positive Covid test it’s remarkable. It’s going to be a year I probably look back on and say ‘man, that was a pretty impressive 2020 team and staff and I’m happy just to be a part of it.

“So, I’ll take your questions, and then I’m going to go take a nap.”

How did Hafley plan on spending his break? Playing with toys, obviously. Both he and the staff also needed to clear their heads as well.

“I think mentally the staff and I just need to get away from it for a day or two,” he added on Sunday. “Just to kind of hit the reset button, sleep, see our families a bit. We haven’t had a day off since July which is fair, it’s what football coaches do. But, usually you have a bye week somewhere earlier than it is now. You need to be fresh. You coach better when you’re fresh, you treat people better when you’re fresh, and sometimes it’s hard because we just go on adrenaline.

The Tuesday plan may have changed with the news of the schedule change coming, but it’s probably safe to assume Hafley and the staff were back at it early this week anyways, grinding away in the film room for the last two games of the season against Louisville and Virginia.

Hafley spoke about just how much the hard work has been paying off despite the unwanted outcome against the Fighting Irish. Expectations have rapidly grown and may be hard to meet sometimes with this passionate alumni fan base, but the overwhelming positivity from some pretty big names has shown everyone how far the program has come in a short amount of time.

“It’s not for a lack of effort, it’s not for a lack of preparation, our guys are fighters,” he said. “A sign of a great team is – just like we have all year – you fix it and you go out and win a game. You played the No. 1 and No. 2 team – and it’s disappointing we couldn’t knock one off – but we lost by 20 total points. When you watch around college football right now and you see 35-0 scores and 45-7 scores…we’re not where we want to be, but we’re not far.

“I appreciate the support. Texts from guys like Matt Ryan and Doug Flutie again (Saturday night), just so supportive and excited about the future. I even got a text from (Celtics coach) Brad Stevens. Just telling me he loves the fight of the team and loves what we’re doing. That one kind of surprised me, but just little things like that mean a lot to me and shows what the city of Boston is seeing. They can’t count on me to get this thing going and I’m excited.”

If you take a look at the grand scheme of things, Hafley is extremely close to being the head coach of a 7-2 football team. If the Eagles convert a two-point conversion against North Carolina who knows what happens in overtime. Now, the Virginia Tech game is debatable. The Eagles did lose by 26, but five turnovers? Do we really believe this team under this staff will turn the ball over FIVE TIMES in another game? I certainly don’t expect to see it. For the point of this excersice we’ll leave it as a loss.

How about the Clemson game? If the Eagles are just a bit more experienced in those spots maybe they close out the Tigers in Death Valley and Notre Dame doesn’t even have a shot to knock them off in South Bend. Speaking of big spots, another five MILLION people had their eyes on the Notre Dame game, if that doesn’t help recruiting not much else will.

Four days after the final game of the regular season against Louisville will be the one-year anniversary of coach Hafley’s introductory press conference. On December 16, 2019, Hafley told a jam-packed room to “Get In” and said he would coach with a chip on his shoulder, even carrying around a list of doubters in his wallet.

As his team enjoys some well deserved time off in what’s been a tumultuous season, when you take a step back and look at everything that has already been accomplished during a pandemic, it’s hard to look at the ACC standings and admit that BC is just a “middle of the road” team still. They’ve become so much more than that already.

The change that people continue to talk about is real, and the rest of the country knows it.