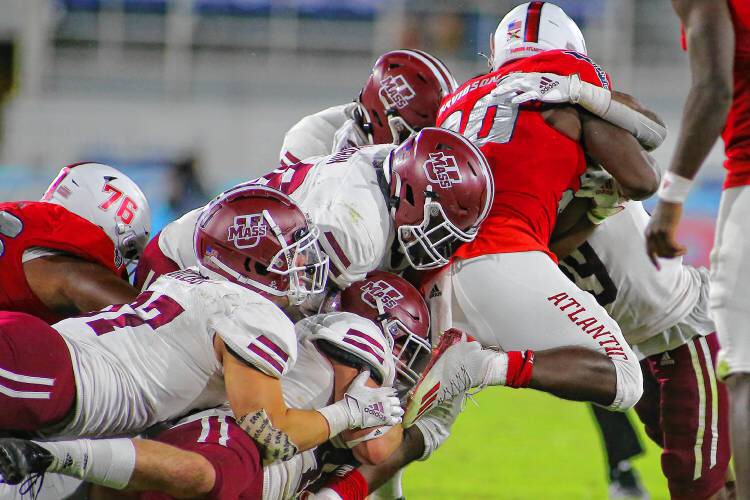 BOCA RATON, FLA: The UMass defense played its best game in the Walt Bell era but a lack of offense proved to be the difference in a 24-2 loss last night to Florida Atlantic.

Bell praised the defense for their effort. “Our best defensive effort since we’ve been here, That’s damn good team defense.”

It truly was good team defense. The Minutemen hurried and harassed Florida Atlantic freshmen quarterback Javion Posey all night sacking him 6 times and tallying 14.5 tackles for loss. The most in a game for the Minutemen since 2003.

As well as the defense played, the offense was a different story. To say the Minutemen struggled would be an understatement. UMass was only able to muster 142 yards of total offense. Freshmen quarterback Will Koch got the start and once again struggled, completing 12/22 passes for 67 yards and an interception.

UMass didn’t have much success on the ground either. Ellis Merriweather paced the rushing attack with 48 yards on 11 carries.

Bell did not mince words after the game when it came to the performance of the offense.

“On offense that was as embarrassing an outing as I’ve seen, and that will be resolved. I don’t know if I’ve ever been around one of those.”

The Minutemen don’t have much time to figure things out offensively.

For the first time this season, they will play back to back games when they travel to Liberty next weekend to close out the season. The Flames are ranked 21st in the country and have one of the most explosive offenses in the country led by dual threat quarterback Malik Willis. It will be a monumental task for the Minutemen to say the least.