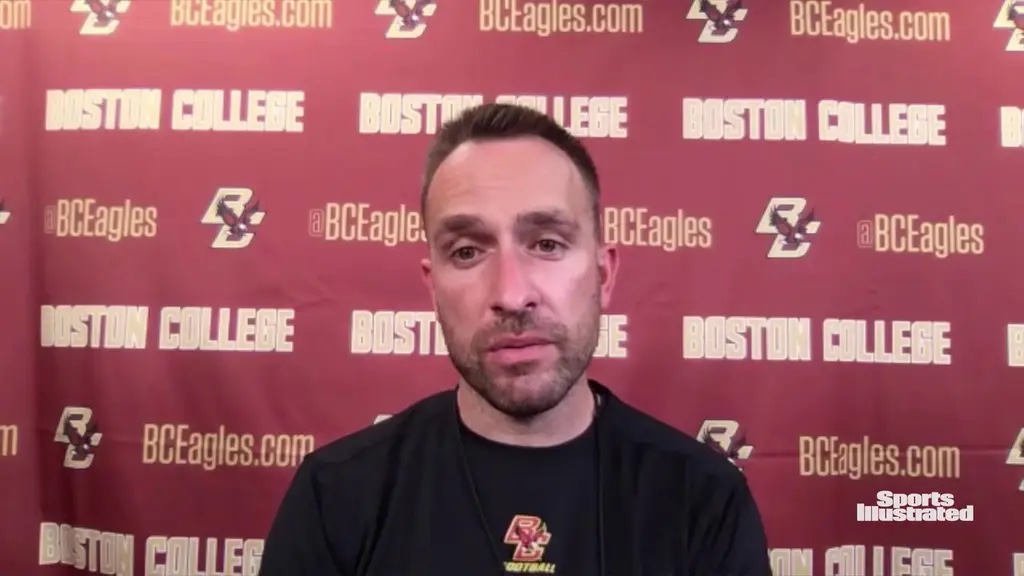 Well, sort of. After a bye week and then an extended bye week that eventually turned into a game week thanks to the ACC, the Eagles were back on the field this week getting ready for Louisville on Saturday.

We’re going to do things a bit different this week. Instead of giving you our standard “everything you need to know heading into (name opponent here) week,” we’re going to stick with the Thanksgiving theme, Of course with no high school football locally, BC football and the NFL will have to fill the void.

So, did head coach Jeff Hafley have any special memories from his playing days in New Jersey? He sure did.

“When I grew up in New Jersey as a kid, the Thanksgiving game is what you looked forward to,” he said. “Thursday morning we were usually playing our crosstown rival and everything would shut down. Everyone would come to the game and everybody would go out the night before and go meet up at the game, it was the biggest thing I remember. It was playing in that game, or looking forward to the chance to get to play in it.

“We were playing our rival – and we should have won by a lot – and it came down to the last play of the game, We went for two, we scored, I threw a pass that got tipped like three times and a kid caught it. It’s still probably one of the most memorable games playing with my best friends against a team you wanted to beat your whole life. It’s still one of the best football memories I’ve ever had. I’ve been part of some big NFL wins, some big college games, but you look back playing with kids you grew up with and you remember those days forever.

“It’s sad that a lot of guys won’t play it this year. Those rivalries meant tradition and that’s what football’s all about. Every Thanksgiving I call my buddies and we’ll kind of reminisce a bit. I wasn’t a very good football player but I can always hang my hat on that bad pass I threw that got tipped and was good for two.”

The game Hafley spoke of was between Pascack Hills High School and Pascack Valley High School, the final score? 8-7.

Quarterback Phil Jurkovec couldn’t recall any particular Thanksgiving day specific memories, but did talk about how much he loves November football.

“I don’t think we ever played on Thanksgiving, but we played the days after,” he said. “Just playing November football, whether it’s college or high school…people are banged up, teams are starting to drag. The best teams play their best in November. I played my state championship game in the snow and my high school team is actually in the state championship this week so, it’s really cool I love the end of the season.”

We’ve talked endlessly – and rightfully so – about how much BC players have sacrificed this season with over 7,000 negative Covid tests, and this week will be especially tough as family members can’t visit for obvious reasons. Before the Louisville game was moved to Saturday, Coach Hafley had quite a unique idea that was going to make this week much lighter.

So, what happens now? Well it’s a regular game week which means preparation has been the same, but there will still be some team bonding on Thanksgiving too.

“We’re going to get some real good food here and make sure these guys are eating well,” Hafley continued. “Thanksgiving is an important day for a lot of reasons and you’d like to spend it with your family. Even me for example, my mom, my brother and my sister, I can’t have them near the house right now and put myself in jeopardy with everything the team has sacrificed. These kids have done so much, and tomorrow’s hard.

“They’ve sacrificed so much already and this is just another sacrifice they’re making for each other. Campus is kind of empty right now and they’re continuing to do this for the love of the game and each other, it’s awesome.”

Perhaps the most mind boggling part of this week with minimal Thanksgiving football is the fact that Saturday’s game is BC’s last home game already. Whether you’re a fan or a member of the media, this Eagles team has given every one of their followers reasons to be thankful this season.

NESN’s Courtney Cox – a BC alum – spoke about how fun this program has been to follow and cover and how intrigued she was about its development from the very first time she worked with Hafley.

“I’ve been pretty high on BC football since 2010 (my freshman year), and I’m talking high when they have moments of excellence (ever to excel was my super fan slogan) to some terrible moments,” Cox said. “When they announced Jeff Hafley as the coach, I immediately asked for an interview and as soon as he signed onto our Zoom I knew it was a different feel. I think there’s something to be said about having a younger guy as a head coach who’s going to rebuild a program. He seems to shoot it straight with the guys and relate to them in a way that I (as a student, friend of players, cheerleader, and now media member) haven’t seen in the two other coaches since 2010.

“It doesn’t go unnoticed that having an indoor facility – an excellent one at that – has helped with recruiting but, I think Hafley is the heart and soul of this program and it’s been an absolute pleasure to watch the leadership play out this season.”

Unsurprisingly, Hafley didn’t even realize it was already the last home game in his first full year as a head coach.

“Thanks for reminding me,” he said with a laugh. “It’s something I’ll talk to the players about. Some guys will be playing their last game in Alumni Stadium and that’s always special.”

If you’ve been invested in the rise of BC football on a personal or professional level this season, it’s impossible not to be thankful for the entertainment and examples of selflessness they’ve provided. A win over Louisville on Saturday to close out Alumni Stadium for 2020 would be one hell of a way to celebrate.