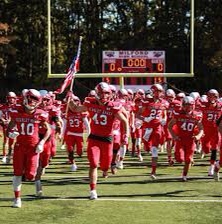 Brothers Dale and Dana Olson know what it takes to win a state championship.

Dana was the head coach while Dale was on the staff for the Millis Mohawks’ 2016 and 2017 wins at Worcester State and Gillette Stadium. Now, the duo is hoping to bring that type of success back to Milford.

Dale Olson was named the head coach of the Scarlet Hawks just before the pandemic took over. Both Dale and Dana were on the staff under Anthony Vizkakis in 2018 and have a familiarity with the team, but it’s more about putting the Scarlet Hawks in the same conversation as teams like King Philip with a move to the Hockomock League’s “big boy” division.

It’ll be a tall task with such an odd offseason and lack of contact with the players, but if anyone’s up for it, it’s the Olson’s.

“It’s been a struggle, that’s for sure,” Dale said earlier this week. “We haven’t done Zooms since the spring ended, and a lot of my guys are playing basketball, but we’ll Zoom right through the winter leading up the the season. It’s gotten a little old watching my guys do yoga, but I will say our guys are in the best shape of their lives right now.”

With the Olson’s wealth of knowledge at their disposal and a massive senior class of 24 kids – nine of them are currently set to head off and play college ball – Milford may be in a much better position the most programs when it comes to hitting the ground running in February.

“With Coach Olson now being our head coach, I feel like the team is extremely focused and determined more than ever this year,” said senior Carter Scudo. “I’ve been impressed with the amount of our players that have bought into the program and brought their work ethic to the next level.”

“I’ve been impressed by the way they truly care about us,” added classmate Mario Lee. “Coach Olson and the other coaches he has brought on the staff have dedicated their time to helping us, especially when they all have different jobs and in such a difficult time that we are in, they are doing their all to help us. They care about every single kid on the roster and want everyone to excel and succeed. Along with caring for us, they are some of the greatest coaches you can get at any level. Their knowledge of the game is unmatched. You can tell when practice starts that this is the time they have been waiting for.

“They go fast and push us to the best of our ability. Thanks to Coach Perkins as well, we are all in the best shape of our lives. The workouts he put us through was like no workout I have ever been through. Without touching weights I would feel sore the next day and would constantly see results in the way I felt and played. Spend a week with Coach Olson and his staff and you’ll never want to stop competing.”

Olson couldn’t credit the seniors enough with helping this transition go as smoothly as possible in such unprecedented (sorry, I had to say it) times. It doesn’t hurt that both he and Dana will be delegating responsibilities evenly too.

“Dana and I have been a package deal for a long time,” he said with a laugh. “So, if he’s the head coach or I’m the head coach we’re both going to run this program together. We’re taking how we ran Millis and implementing it on a bigger scale in Milford. Obviously, there’s a lot more kids but in the end we just want the kids to compete at everything they do.

“I’ve been blessed this transition has gone so smoothly thanks to the senior class and my five captains.”

The guys playing college ball include Scudo, Dom Schofield, Brady Olson, Sean Murray, Matt Martin, Matt Varterisian, Kevin O’Conner, Evan Hazzard and Keith Sutton. All of them will be relied upon heavily to bring Milford to that next level, especially as scholarship athletes. Scudo, Lee, O’Conner, Martin and Nick Yohn will be the captains looking to put Milford football back on the map as a serious contender in the Hock.

“Since there are no playoffs, our main goal is still to win,” said Lee. “We want to win the Hockomock League. It’s simple. Our senior class this year is the most talented senior class in the state and I stand by that. Players like Max Martin, Carter Scudo, Kevin O’Connor, Nick Yohn, Evan Hazard, Brady Olson, Dom Schofield, and Sean Murray are all leaders on this team that make us special. Everyone on our team loves the game and strives to play it. We can’t wait for the season. This is a year full of memories we’ll talk about when we’re old with children. Our goal is to make this season a memorable one.”

“Our goal this year is to win the Hock Large,” added Scudo. “We definitely face some great teams along the way but, with the work I’ve seen our boys put in, I’d match us against anyone in the state. Especially being under the call of Coach Olson.”