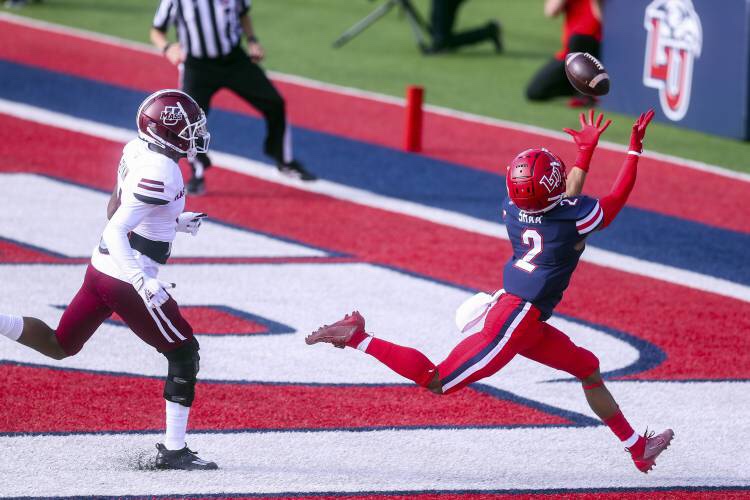 LYNCHBURG, VA: The UMass Minutemen wrapped up an abridged 2020 season 0-4 after losing to Liberty 45-0.

UMass started Redshirt Freshmen Garrett Dzuro. Dzuro got off to a decent start but struggled after the first quarter. Dzuro completed 9 of 22 passes for 172 yards and 1 interception.

The Minutemen tried to establish the running game early on but it was struggle as Liberty dominated the line of scrimmage. UMass finished with 55 yards rushing on 31 carries.

After playing their best game of the Walt Bell era defensively, the Minutemen came back to earth today giving up 529 yards of total offense.

Flames quarterback Malik Willis bounced back after a tough performance last week against N.C State. Willis completed 16 of 24 passes for 223 yards and 3 touchdown. Willis also rushed for 63 yards on 7 carries and added another touchdown on the ground.

UMass’ struggles against the run have been well documented in the past two years and after doing a good job against the run last week against FAU, today was a different story. Liberty running backs Peytton Pickett and Joshua Mack each rushed for more than 100 yards. Pickett rushed for 125 yards on 10 carries including a 16-yard touchdown. Mack ran for 109 on 11 carries and touchdowns of 59 and 54 yards.

The Flames went into the locker room with a 31-0 lead at the half and they tacked on two more touchdowns in the second to seal the deal and send the Minutemen home winless for the season.

After opting not to play in September, UMass decided to comeback and played a truncated season. While the move was beneficial for some of the younger players in the program, it also proved that this program has a long way to go before being competitive.