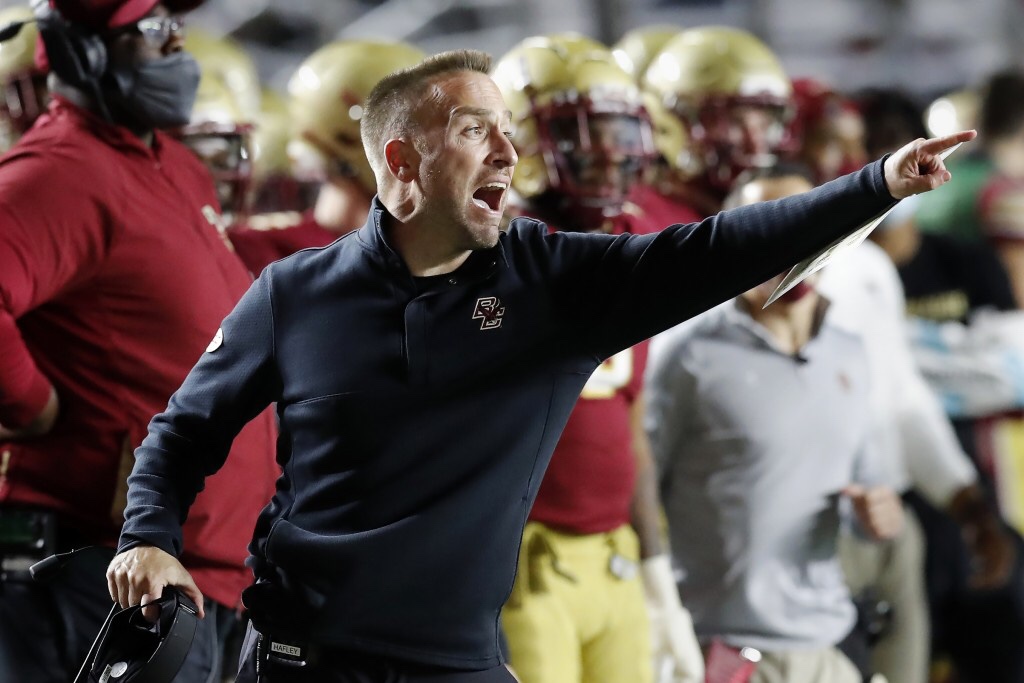 We made it folks. Well, they made it.

Back in March when there was plenty of uncertainty regarding the season, all anyone who was covering or following the football program wanted was an opportunity to see some actual games.

Not only did Jeff Hafley and his staff provide that opportunity for the fan base and local media, but he got the entire program to buy in to an extent that no one could have ever imagined. Entering this weekend – with testing still to come – the Eagles have made it through 11 and now most likely 12 games without a single positive Covid test.

It’s been absolutely stunning what this program has been able to accomplish. The Eagles could be 0-11 right now and it wouldn’t matter. Simply getting through every game they’ve played this season while both the NCAA and NFL seasons are in shambles is a true testament to how much these guys wanted to play the game for one another.

” I think what’s really helped is just our campus and how good the students have been,” Hafley said this week in one of the final regular season media sessions. “You’ve got to credit Father Leahy for that because it’s not just our football team, I think that our campus has done a great job too. You’ve got to give a lot of credit to everybody around here, certainly our players.”

December 16 will mark the one-year anniversary from coach Hafley’s introductory press conference. It obviously hasn’t been exactly what he envisions, but heading into the final game of the season (not including a potential bowl game), Hafley acknowledged that he’s done some reflecting.

” I actually thought about that, the other day when I looked at the calendar, and I actually, looked back yesterday and I look back at last year, I feel like I just got here,” Hafley said. “Last year on November 30, I was getting ready to play Michigan. It felt like yesterday, and this year has gone by incredibly fast. From the time I got here to the press conference, to going back to playing the college playoffs to getting here to meeting the players to going on recruiting, coming back, starting spring ball and then packing up and going home and really meeting the team through Zoom. This season has been more special than I could have ever imagined. Because of the players, and especially because of the seniors, and because of the leadership that they showed in the foundation and culture that they were able to build and one of the hardest years that any of us could ever experience.

“So I’ll never forget that first win when no one thought we would play. I’ll never forget any of the moments that we’ve had in the locker room after these hard wins when people didn’t know if we would play. People picked us 14th or 15th in the conference. I don’t know if there could be a more special year, other than the fact that we couldn’t celebrate with the fans and the students. But how close we got, the time we spent together. I think it all happened for a reason and I’m very appreciative of the guys.”

The Eagles (6-4, 5-4) have an opportunity to earn a winning record in the ACC for the first time since 2009 if they can beat Virginia (4-4) on the road. It’s a small goal to check off if they can achieve it, but a goal guys are taking very seriously.

“We started with a bang this season, and we want to finish with a bang,” said DB Josh DeBerry earlier in the week.

“No pressure, but excitement,” said Hafley of the challenge. “I think what people also have to look at is, every game has been an ACC team. To get up for every single game against good opponents, I think it even says more about the season, we have to have a winning record in a 10-game ACC schedule, that’s even harder than if you’re playing six, week in and week out with how well coached this conference is and all the athletes and speed. So no pressure, but excitement, just grateful for the opportunity to try to get that.

“It’s usually an eight game schedule. So now we’re playing 10 teams. If we could finish 6-4 in the ACC, it would be a nice way to send out the seniors, good momentum going into the offseason, and just a lot to build off of. Regardless, I’m already proud of the guys and how they’ve fought. I think in the last five games, we’ve won three and lost to the number one and two in the country. The last five games, our guys are getting better and will keep repeating. I think it’s going to help us down the road.”

Speaking of the Cavaliers, what can we expect? Well, they’re certainly better than their record would indicate, that’s for sure.

“Offensively, I think their quarterback is playing really well. He’s a really good athlete, a southpaw, he’s throwing the ball pretty well. He seems to have really good command in the huddle,” Hafley explained. “Their last three games I thought they’ve done really well on offense. #4, the wideout is a dynamic player. They’ll line him up in the slot, they’ll put them out a wideout, they’ll put them in the backfield. Then #99 comes in to play some quarterback, play some wide receiver, they do a lot on offense, a lot of different personnel groups, two tight ends, no backs, three wide receivers plus a quarterback or two quarterbacks in the game. They do a lot. We’ve got to really prepare and make sure we’re on top of everything. Their one tight end #87 looks like a giant, looks like he’s about 6’7” so he’s definitely a mismatch.

“We don’t have many defenders that are 6’7” and #81 is a really good receiver. I think #13 has good speed, is a good deep threat and the other really tall guy, big guy on the outside. We’re going to have to be physical because they like to throw them up the ball. The O line, they look like they’re all over 300 pounds. They do a lot of stuff. They have some explosive playmakers, #5 is playing really well. We’re definitely going to have our hands full defensively.”

By all accounts Phil Jurkovec should be healthy enough to play this weekend after Dennis Grosel was forced to come in and close out the Louisville win. If you’re looking for a sneaky X factor this weekend with the Eagles stunningly listed as four-point underdogs, look no further than kicker Aaron Boumerhi. A quick glance at the overall leading scorers in all of college football shows that Boumerhi is actually 26th in the country in total points with 72. Javonte Williams of North Carolina leads the country, accounting for 108 points.

I don’t believe this game will be as close as Vegas does since BC is still playing with a huge chip on their collective shoulder. However, if this does come down to the wire, don’t be surprised if it’s Boumerhi sending the Eagles to a 7-4 finish.

Win or lose, the 2020 Boston College football team should forever be remembered for its commitment to the new coaching staff and to one another rather than whatever the final records ends up looking like.