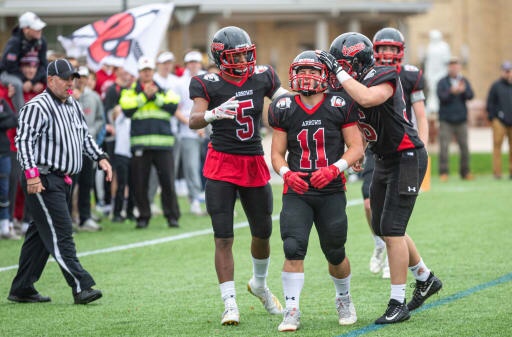 Public high school football programs have dealt with the loss of the fall season and can see the light at the end of the tunnel as they look ahead towards February.

The same can’t be said for ISL programs.

With different schedules both acldemecially and athletically, there is no way that ISL football teams could play in February and not interfere with spring sports. So, programs like St. Sebs – who won the league title in 2018 – only had a few 7-v-7 sessions and some inter squad scrimmage time this fall before ultimately having to call it a season.

For second-year head coach Dan Burke – who played for the program in the 90’s and was a longtime assistant under legendary coach Bob Souza – the abrupt end to what was supposed to be a great season was tough to swallow, but it was a bit easier thanks to the positive attitude the team took towards the situation.

“The ISL is doing something different because most of the schools in the league are boarding schools that get out at the end of May, so to try and squeeze us in, we just can’t extend the season like the MIAA is doing,” Burke explained.

“We went in to the season as optimistically as we could. We knew the MIAA had pushed things out to February. We saw the numbers for the state were low and thought maybe there’s a chance the state would open things up for competition and contact sports, which they did…but not until it was too late. We just kept plugging along to see what we could get, so those practices we had were pretty much the send off for the seniors. Thankfully, most of the guys play some other sports too.”

Senior Seamus Foley expressed how much the team tried to take advantage of the time they had together.

“I know that our group of guys would have been ready to ball if we had the opportunity,” he said. “This September, guys showed up ready to play even though the odds were against it. Every chance we had to get together as a team this fall, whether it was small group workouts, 7 on 7, or forms of team practices, the boys showed up as if it was a game week. No doubt we would all buy in and adapt to a hybrid opportunity.”

Foley was one of 13 seniors set to return this season, with many of them already committed to play at the next level or in discussions to do so. The goal was another league title, instead, they’ll have to cherish the memories they created for a few short months.

“As a team, we all had in our mind the one and only goal, to win an ISL championship,” Foley said. “We were fortunate enough to return a lot of seasoned players. The senior class was all over the field on both sides of the ball and we are a really close group that has been together for a while now. It would have been a special season for us. We all had that feeling, even last winter as soon as football had ended, we all got right into working towards that long term goal.”

Foley also talked about the culture at St. Sebs. Passing down knowledge to those that are coming after you is something that runs deep in the Arrows’ program, and being stripped of the opportunity to provide that leadership to younger teammates may be the toughest thing the older guys had to handle.

“Individually, I was looking to have a good season and help the defense out,” Foley added. “There were some talented players in the linebacker position before me and with a few years of experience under my belt, I was really looking forward to correcting some of the mistakes I made in the past, putting it all together and having fun playing good football. I was fortunate enough to grow relationships with some of the players that were seniors when I was a sophomore and a junior. I want to thank them; I am extremely grateful for all of them. They provided a clear example of St. Sebs football, but more importantly, they were constantly looking out for us younger guys and coaching us up.

“I was really looking forward to finally being on the other side of it and helping some of these younger guys out and show them what Sebs football is all about. That was a really big goal of mine, to play that role and it is something that meant a lot to me, so I wanted to pay it forward.”

Louis Hansen (TE/LB, Michigan), Foley (TE/LB, Undecided), Michael Phelps (QB, Trinity), Sam Frisoli (WR/DB, Tufts), Nick Vallace (RB/LB) & Scott Behman (OL/LB) were all going to be part of the core group looking to bring the ISL title back to Newton. Instead, they were in charge with making sure their senior season was memorable no matter how short it was.

“I can’t say enough about the leadership this senior class showed,” said Burke. “These guys did everything right. They made sure guys were still showing up committed every day when we didn’t know if the would have a season, all of them, every single one of them were just great leaders for this program.”

Burke also mentioned already heavily-recruited sophomore Zion Simmons (RB/DB) in particular as someone that might turn some heads when the Arrows take the field in 2021.

For now, Foley and the rest of the senior class – just like every other senior class that put on the pads for an ISL team – will have to settle for spring sports to get that camaraderie back, but they’ll always have a lasting legacy without playing a single down in 2020.

“This year wasn’t what we wanted but we made the most out of what we were dealt,” Foley added. “Even after the knowledge that we would not have one game, we still put the pads on and played some football for our last week. I think that’s our legacy that we’re leaving behind. Even though we didn’t have a chance at the title, a schedule, or even a game, this group came out every day as if nothing had changed. We fought till the very last minute. We battled each other and competed.

“If you drove by 1191 Greendale Ave at 3:30 during the fall, you would’ve thought we were prepping for a game. That’s what tells our story best. We never gave up or hung our heads. We took what we were able to take and gave it all we had. We came back out to the field each and every day we could until it was over.”