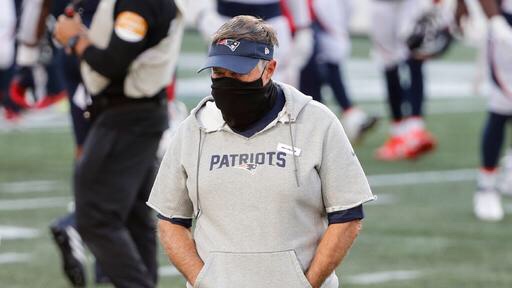 Forget what we said about any of the other interviews this year. This one was the best, hands down.

Some of the local media has finally had enough of Bill Belichick acting like they’re beneath him and started to (sort of) call him out for answering questions like a child. While there’s still the segment of the media who will forever worship the ground he walks on, there are guys – like Lou Merloni – who have simply had enough.

Before we get to Lou’s epic exchange with the coach on Monday following another disgusting, embarrassing loss to Miami that officially knocked the Patriots out of the playoffs for the first time since 2008, here’s what else stood out in the interview:

With no Fauria on hand, it was up to Glenn and Lou to bring the heat, and Ordway opened right up asking Bill if there is any kind of solution to the offense not scoring a touchdown again this past week in Miami.

“Well, we’ve got to do a better job there,” Belichick said. “We moved the ball, we were in the fringe area six times and settled for four field goals. We’ve moved the ball and gotten first downs, but we just haven’t been able to come up with many points.”

“That goes defensively too,” he said. “The last two weeks we haven’t played well in the running game. So, that’s two areas that if we don’t do better there, you’re not going to get the kind of results we’re looking for. It’s different issues but similar problems.”

Merloni then had the runaway winner for awkward pause as well as overall exchange of the year with the coach when he fairly asked if bringing Stidham in to start the final two games could help the offense produce more points.

“Yeah, we’ve talked about that,” he said after about eight seconds. Merloni followed up with “so, is Cam still your starter this week?”

“We’ve talked about that question, it’s been several weeks now where we’ve continued to ask the same question,” Bill said as you could hear the tone in his voice getting annoyed. Lou, again just doing his job, tried to point out that with two weeks left and the playoffs now out of the question it may be a good idea to go with Stidham. “Does anything change as far as that goes?” Lou asked again.

“You ask the same question every week Lou,” Belichick snapped back. “Every week you ask if something’s changed,” Merloni quickly interjected: “Something has changed, you guys have been eliminated though, maybe you look at Stidham the last two weeks?”

Belichick still was having none of it, responding with 15 seconds of dead silence like a child who doesn’t like being questioned about the mess they made. Ordway tried to move on, but Merloni kept pushing. “I do wonder what that fine line, how do you balance it” he continued. “I don’t know if Stidham’s not showing what he needs to in practice that once you’re eliminated to give him a couple games to see what he looks like in a game as a starter.”

Once again, Belichick simply couldn’t handle being criticized, coming up with another childish answer. “Yeah, great point Lou,” he said.

Ordway tried his best, asking if it was a possibility or not.

“Again, we have a lot of questions as a team we need to answer,” Belichick replied. “That’s what we’ll be looking at tomorrow, today, this week and so forth. So, we need to score more points, we need to play the run better, we need to play better situational football, need to do a better job in all those areas.”

Ordway soon asked if Bill’s approach to the final two games will change now that New England is in unfamiliar territory being eliminated from contention.

“We’ll talk about those things and talk about the game as a staff here this week,” Belichick said. “There’s no big plans right now though, no.”

Ordway tried to get a bit more, altering the question to ask if there still needs to be an emphasis on a winning culture.

“That’s what we try to do every week, and that’s what we’ll continue to do,” Belichick muttered. Lou chipped in with a question along the same lines, asking how much the veteran leaders will be relied on to make sure the season is finished properly.

“Yeah, I think everybody’s trying to do their best,” Bill said. “We all need to do better, starting with me, the coaching staff, the players, we all need to do a better job and that’s what we’ll try to do this week.”

After some brief Nick Folk, Sony Michel, the challenge of dealing with Covid this season, Stephon Gilmore and Julian Edelman chatter, the coach ended his painful experience by wishing the listeners a Merry Christmas.

If you didn’t hear this 16-minutes of radio gold live, do yourself and go listen on WEEI.com or the Radio.com app. You won’t be disappointed.