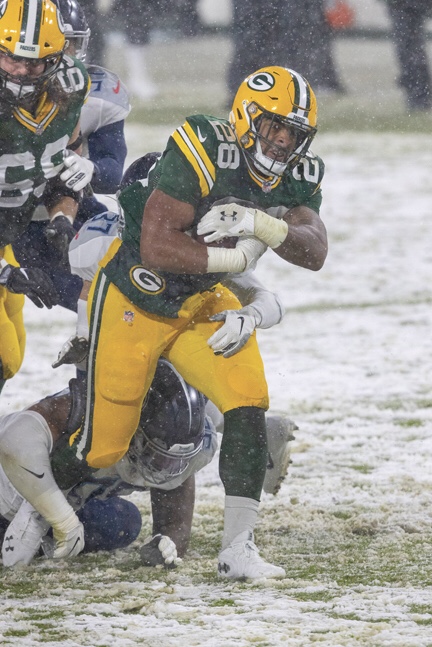 What a week it’s been for former Boston College running back AJ Dillon.

First, the most decorated rusher in Eagles’ history burst onto the national scene Sunday night during Green Bay’s 40-14 thrashing of the Titans on Sunday Night Football. Dillon carried the ball 21 times for 124 yards and two touchdowns on the same night Derrick Henry was on the other sideline.

The national recognition continued on Tuesday when he appeared on the world famous Pat McAfee Show. It’s been a big couple of days for “the sauce,” but the always modest Dillon has handled things in stride.

“I’ve taken so much from Jamaal (Williams) and Aaron (Jones) and the coaches and everything,” Dillon said in his first postgame press conference of the season Sunday night. “My time being able to watch them has really helped me with my development.”

Of course, Dillon was talking about running backs Jamaal Williams and starter Aaron Jones. Jones did play in the game, but had to exit early. Dillon could provide some huge value as the weather turns cold in Green Bay, making him a serious weapon during the postseason. His dominance in the snowy scene at Lambeau Field on Sunday night could very well have been a glimpse into the future.

The only negative thing anyone could take from Sunday night’s performance for the rookie was his Lambeau Leaping skills. Let’s just say, they weren’t pretty.

“Our first rule is no excuses, so I’m not going to say anything,” Dillon said with a grin. “I’ve got to go look at film and do better next time, but luckily, (Allen) Lazard was down there the second time to give me that little extra push. I’m looking forward to when fans are back next year and everything so they can help me up there a little bit, but I’ll have it perfected by then.”

After some good old fashioned leg talk to open the segment, McAfee asked Dillon what the biggest adjustment from BC to the NFL has been thus far.

“I’d say just everybody is so much smarter in the league,” he said. “There’s not very many mistakes over there on defense, so you really got to know what you’re doing. It’s a little tough for every rookie to figure out, but I’ve got some superstars in that room with me as well, so I’ve been learning a lot from them.”

Dillon also acknowledged that he’s thought he belonged in the league since day one when McAfee asked if the physicality has been an issue at all.

“I definitely thought when I left BC I was ready to play at this level,” said Dillon. “There’s still some things I’ve got to work on obviously.”

McAfee then got to the bottom of arguably the most important issue here, and that’s how AJ got the nickname “the sauce.” Turns out, it was at The Heights.

“That was in college when I was at BC,” Dillon explained. “I just loved applesauce. Like, I’d be walking down the dorm and just chugging a thing of applesauce. There would be games where people would chuck them down on the sideline. We had to keep it PG so there was no beer or anything, I’d slam my applesauce (like Stone Cold Steve Austin slamming beers in the 90’s), I love it.”

The world finally got to know who AJ Dillon was on Sunday night and then even more so on Tuesday. Hopefully, this is just the beginning for “the sauce” as Green Bay embarks on its playoff run.