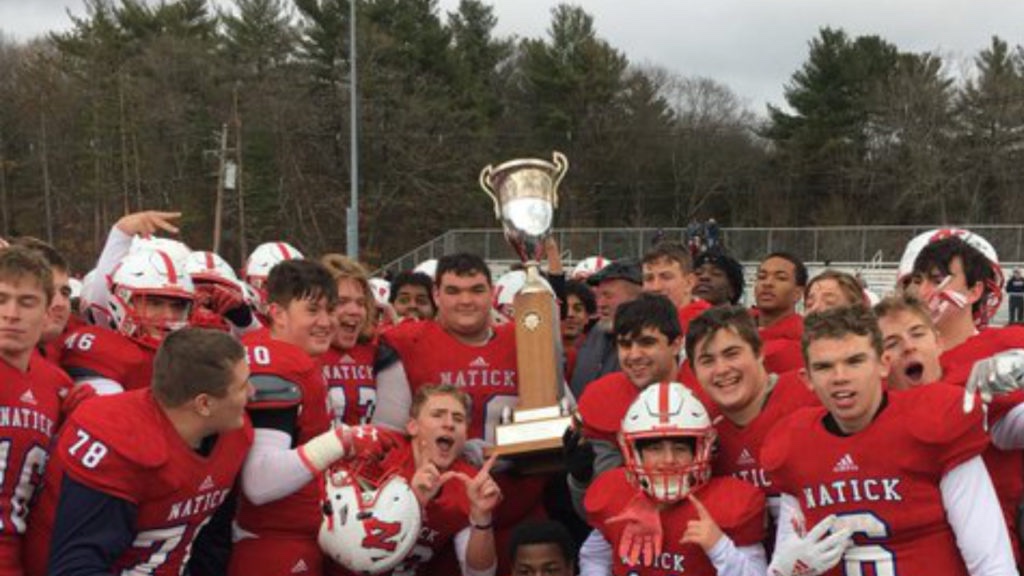 Can you believe we’re up to 17 of these already?

Our latest “Featured Team of the Week” is one of the most respected programs in the state, the Natick Redhawks.

Whether you’re a Bay State Conference rival or a random opponent from somewhere in Massachusetts, whenever the red or white jerseys of Natick are standing on the opposite sideline, the game automatically has just a little bit more juice.

Head coach Mark Mortarelli has been on the sideline for 20-plus years, and this year more than ever, the idea of the white helmets with the red “N” not being out on a field is a scary thought.

“The biggest challenge for me has been the changing narrative,” he said. “We were going to play at first, then it looked very bleak, then it was completely terminated, then it looked like we thought we could have practices and kind of got high off that again and developed a plan and the kids were all excited. We sent out emails with different practice structures and all that, but that was shut down.

“Then, we were told in lieu of practice we could do workouts, but that was shut down. It was all for good reasons with safety the top priority, but at the same time we coach football for the interaction with the kids. Winning is nice, but it’s the interactions, that’s why we do it. We feel we have a very special senior class this year that loves the game and that’s who we feel for.”

Senior quarterback Will Lederman was set to be in the conversation as one of the top QB’s in the state this season, now, he’s stuck waiting like every other player in the Commonwealth, hoping he gets one more opportunity to step on the field with his teammates before going to Bentley next year.

“To stay locked in is definitely a challenge when each season keeps getting taken away,” Lederman said recently. “But, it’s made us more appreciative of the ability to play. Going out on the turf for 7v7’s, or going to the gym in separate groups has been the best way to try and stay locked in and if they let us play, we’ll be ready.”

Lederman’s classmate and fellow captain Jake Dunlap – who is planning on playing somewhere at the next level – talked about how difficult it would be to make the leap to college ball without having a season to fine tune some things first.

“Without a season it would be very difficult to be able to fine tune a lot of parts of football,” he said. “Football is a physical game and there’s only so much that can be done without contact. With or without a season though, I feel as though I will be ready to play at the college level. It’s always been a lifelong dream to do it, so in the end I would do whatever it takes to be able to be part of a college team.”

“I work out weekly with M2 QB Academy and my QB trainer, but nothing simulates live football so that will be a big challenge,” Lederman added.

Super Bowl or bust has long been the thought process in Natick, and even though that’s not going to happen this year, the Redhawks are dead set on adding another memorable season to the record books. Lederman, Dunlap, TJ Dalicandro and Luke Rader will be the four senior captains, but this Natick roster has 23 seniors, nine of which have been playing quite a bit since they were sophomores.

Add that type of leadership with young guys like Christian Lederman – Will’s twin brother – and David Seiche, and the sky is the limit this season.

“Those four senior captains are going to be huge pieces to the puzzle obviously, and Will is going to be the guy that makes it all go on offense,” Mortarelli said. “We’ve got a great amount of leadership, not just with them but with our entire senior class, and those young guys among others are guys who have played quite a bit for us and guys we’re really excited about.”

Redhawks football has always been about the process, and this year more than ever, staying patient is key.

“We will look at this season on a weekly basis. Win one game at a time and take it from there,” Dunlap said. “Our goal will be to win as many games as we are allowed to play.”

“Year in year out, Natick football’s expectation is Super Bowl or nothing,” added Lederman. With no playoffs, our goal would be to win every game one at a time. With no playoffs, there’s no guarantee of a game the week after due to Covid. So, we’re not holding anything back each game and looking to score as many points as possible.”

High school football’s ability to provide memories for a lifetime is what makes it so special, and for both Lederman and Dunlap, no season in 2021 won’t be able to erase countless memories wearing the red and white has given them.

“My best memories would be the team, each year there’s great kids,” said Lederman. “From 6 AM workouts in the summer, to the focus even at pasta dinners on a Thursday. No sport at Natick has as many intense expectations. My best memories will be winning games with the team.”

“My favorite memory coming out of Natick football would have to be our win last year against Wellesley in the playoffs,” added Dunlap. “It was a game we came into with a lot of doubt, missing our star quarterback to go along with the fact I had broken my hand in the previous game (that wasn’t gonna stop me from playing though). But, in the end we played what I think was our most well rounded game of football I have ever been apart of.”

The uncertainty continues to swirl, and frustration continues to grow around the state, but Mortarelli is trying his best to maintain a tight ship, and hopes there are plenty more memories to be made for this version of the Natick football program.

“I just really pray we can get out there and give them something for the Fall II season,” he said. “I am full speed, pedal to the metal that we’re playing. We’re telling kids to stay optimistic until someone tells me otherwise, but we’re preparing like we’re going to play.

“We met as a staff a couple weeks ago, and our whole message is, we better be ready. If we do play, preparation is going to be shorter, but we’re lucky in Natick that our kids are always prepared. If we get the green light and we’re not ready, shame on us. We’re going to be ready to go.”