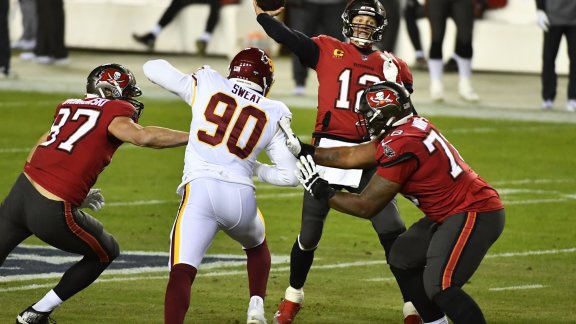 One down, three to go.

Tom Brady is now three wins away from a seventh Super Bowl ring after the Buccaneers took care of a pesky Washington Football Team 31-23 on Saturday night in the NFC Wild Card playoff game.

Yes, I know he doesn’t play here anymore. If you can’t put your Patriots pj’s away for a little while and root for the single greatest athlete in our lifetime then you’re a child.

For those of us that have continued to be Patriots fans while also rooting for Brady to have success like normal human beings, it was quite a fun night on Saturday as the GOAT threw for 381 yards and two touchdowns. The offensive line was incredibly impressive against the stacked Washington front led by Chase Young. Brady was sacked three times, but between the offensive line and blocking from Rob Gronkowski, he remained about as clean as you could hoped for.

The defense is still an issue and will ultimately be the reason why Tampa Bay is knocked out if and when that happens, but for now, the NFL has its dream matchup on Sunday (6:40) in New Orleans as Brady and Drew Brees will meet in the Super Dome with a berth in the NFC Championship game on the line.

“That’s a great front, just a big aggressive defense, this was a good test for us,” Brady said postgame. “It’s good to win and advance, but if we don’t play well next week we’re not going to be happy. So, I’m glad we won, I’m glad we’ve got another week of work, and we’re going to go in there and try to have a much better week.”

In a stunning turn of events, Brady ended up having to out duel Washington quarterback Taylor Heinicke to avoid getting upset. Heinicke threw for 306 one TD and one interception in the loss, but made some incredible plays with his legs, running for 46 yards and a TD. It turns out he was also on the Patriots practice squad briefly in 2017, adding another layer to the Brady drama.

The Bucs went up 9-0 after one on a Ryan Succop field goal and an Antonio Brown 36-yard TD catch, with the extra point getting blocked. A two-yard TD run for JD McKissic cut it to 9-7 in the second, but a 27-yard TD catch for Chris Godwin (with a failed 2-point conversion) and a short field goal from Succop made it 18-7 at the half.

Heinicke had a hell of a third quarter, leading a field goal drive and then diving from the 4-yard line on an 8-yard TD run to cap another drive and cut the deficit to 18-16 with 2:14 left in the third. A 38-yard field goal from Succop and a 3-yard TD run by Leonard Fournette pushed the lead back up to 28-16. Heinicke wouldn’t go away, leading another TD drive that ended with a Steve Sims Jr. 11-yard catch, making it 28-23.

Brady went on to lead a field goal drive and Succop made it 31-23 with 2:49 to go. Heinicke was able to get the ball down to the Bucs 49 before ultimately turning it over on downs, sending Tampa to the NFC Divisional round.

“There were different moments – I don’t think there was a moment,” head coach Bruce Arians said when asked when he thought the Tampa offense finally started to click and become more consistent. “Obviously, before the [bye week] we were playing pretty well, and then the second half of the [Falcons] game – it’s been on fire since then.”

If there was ever a week that the Tampa Bay offense needed to be consistent, it’s this one. The Saints have owned the Bucs this year and if Brady is going to have a shot at the Super Bowl, he’s going to have to get through the house of horrors known as the Super Dome.

“”I think it depends when you play them. If it’s September and October, a lot of things change in a season. Players are in, players are out, injuries, all those type of things,” Arians said when asked how hard it is to face a team three times in one season. “The familiarity with the players – Marshon Lattimore knows Mike Evans – who’s going to win that battle? Same thing [with] Tristan Wirfs and Cam Jordan – it comes down to one-on-one battles of guys who know each other. Who’s going to make those game-changing plays in this game?”