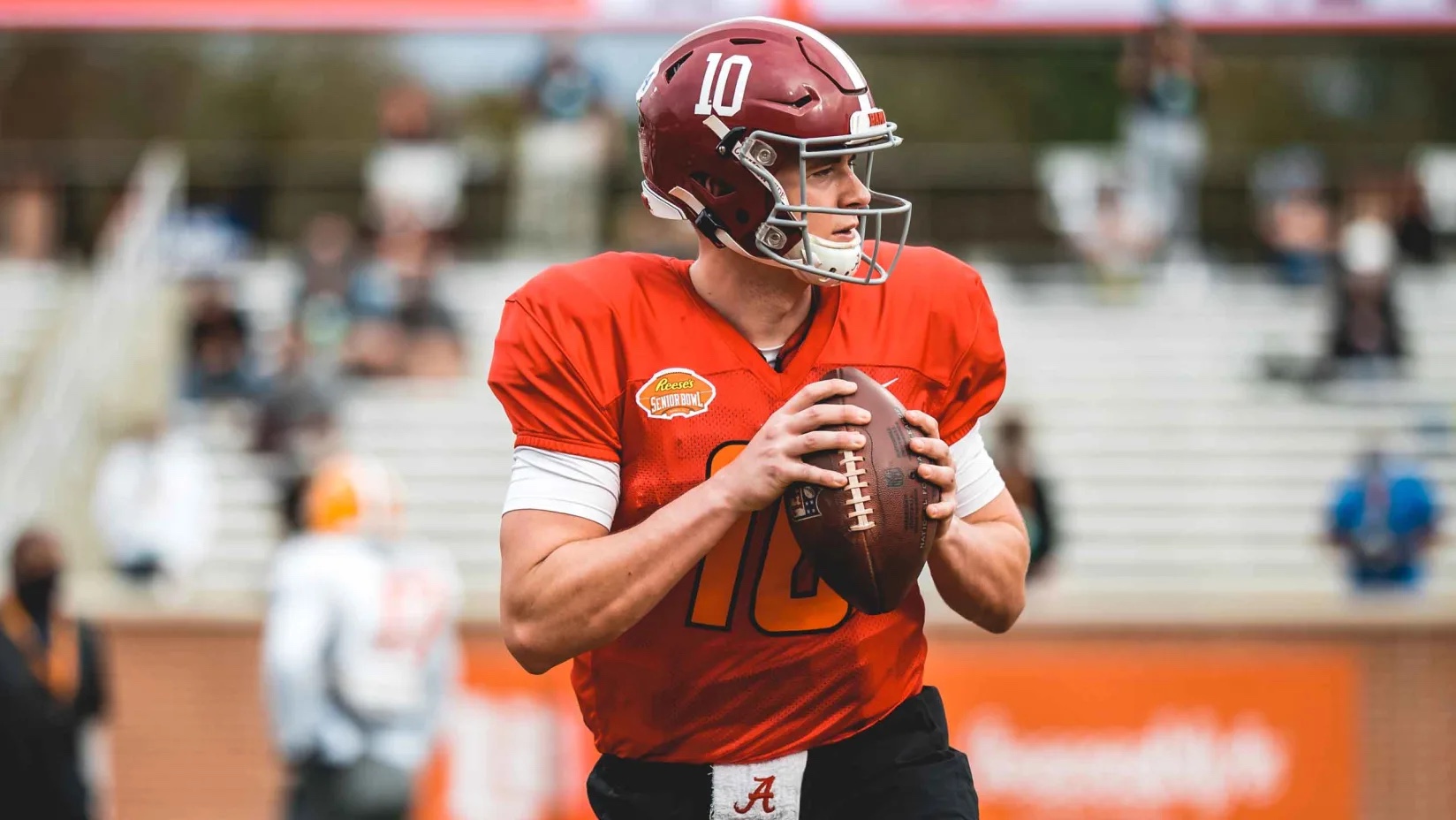 The NFL will descend upon Mobile, Alabama this week for the annual Senior Bowl. It is an opportunity for all 32 teams to get one more look at some of the top players in the country in pads.

For the Patriots, this Senior Bowl is vitally important. Coming off a 7-9 season, this is an important off-season for Bill Belichick and his staff.

So, what positions will the Patriots be focusing on this week? It all starts at quarterback. Belichick and offensive coordinator Josh McDaniels will pay close attention to the quarterback position as they try to find Tom Brady’s heir apparent. It was abundantly obvious last season that the future quarterback of the organization is currently not on the roster.

With that said, here are the six positions the Patriots will focus on this week in Mobile.

1. Quarterback: Belichick needs to find his long term answer at the quarterback position. Alabama quarterback Mac Jones (American) has been linked to the Patriots as a possible target in the first round. Jones has good size, plus arm strength and is accurate. He also takes care of the football, something Belichick values immensely.

Georgia’s Jaime Newman (American) did not play in 2020. Newman put up good numbers at Wake Forest prior to transferring to Georgia. He has a big arm, good size and he is athletic in and out of the pocket.

Felipe Franks (National) of Arkansas is an intriguing prospect. The former Florida quarterback transferred to Arkansas last year due to injury. Franks bounced back this season and had a good season for a young team. At 6- 6 234 has ideal size and arm strength but holds the ball too long and tends to force throws. Franks could be a quality developmental prospect.

Notre Dame’s Ian Book (National) is another quarterback to keep an eye on. While he lacks the size, Book’s athleticism, intelligence and accuracy make him a Patriot type quarterback.

2. Wide Receiver: Two years after drafting N’Keal Harry in the first round, the Patriots are going to once again be looking to upgrade a position that they have struggled to address.

There are several receivers to keep an eye on in the Senior Bowl that fit the way the Patriots like to play.

Oklahoma State’s Tylan Wallace (National) is a receiver that will get the Patriots attention. Wallace is a good route runner who has a feel for man and zone coverage and can adjust his routes. He also has good size at 5-11 193. He missed time with a knee injury in 2019 but bounced back this season and showed the form that made him one of the top receivers in the country two years ago.

Wake Forest’s Sage Surratt (National) opted out of the 2020 season. He was a man among boys in 2019 before a season ending knee injury. At 6-2 215, he has good size, runs clean, fluid routes and can win one on one on contested ball situations in the red zone. Surratt is a smart football player who can pick up any system. He would be a great fit for the Patriots.

LSU’s Racey McMath (American) and Clemson’s Amari Rogers (American) aren’t typical Patriots receivers but if the Patriots want to make big plays in the passing game, they need to upgrade the overall speed at the receiver position. Both are guys that warrant consideration.

Western Michigan’s D’Wayne Eskridge is the ideal slot receiver for the Patriots. At 5-9 188, he can play in the slot and he is vertical threat in all three levels of the field. He has had a bog week in Mobile and could go earlier than expected.

3. Tight End: The Patriots drafted two tight ends in last year’s draft in Devin Asiasi and Dalton Keene. Both struggled to stay healthy and neither made an impact in 2020. The Patriots have to address the position once again.

The first name that comes to mind for me in this game is Boston College tight end Hunter Long (National) At 6-5 254, Long has the size and the skill set to be a starting tight end in the NFL. He would be a great fit in the Patriots system because of his ability to play inline and offline.

Ole Miss tight end Kenny Yeboah (National) is more of a detach, move tight end who can line up in the slot, as a wing or split out. Yeboah is a match up generator who can win one on one and make plays after the catch. He needs to be more consistent. He doesn’t always play to his ability.

Noah Gray (American) of Duke is a Leominster, Massachusetts native. The former receiver turned tight end has good size at 6-4 240 and profiles more as a detach tight end who can line up in the slot, on the line or split out. Gray would give the Patriots a match up piece in the red zone.

The defensive tackle class in this draft is ok, not great. USC’s Marlon Tuipulotu (American) is a possibility on day three. At 6-2 308, Tuipulotu is ideally suited to play in a one gap system.

The same can be said for Levi Onwuzurike (National) who is first round talent but didn’t play last season. Onwuzurike is a one gap three technique who has strong and is explosive on the snap. At 6-3 295, he can play inside on early downs and kick outside in sub or 30 packages.

5. EDGE: The Patriots lack of a pass rush has been an issue for years. This class isn’t great inside along the defensive line but the EDGE talent in this class is good.

Penn State’s Shaka Toney can play as a stacked linebacker or as an on line EDGE pass rusher. Toney has an explosive first step and displays good hand work.

Florida State’s Janrius Robinson is explosive, has good length and flash the ability to be a consistent pass rusher. Consistency has been an issue for Robinson, but the upside is abundantly obvious.

Belichick tried to address the issue in last year’s draft by drafting Josh Uche and Anfernee Jennings but it took both of them a while to get going. Both have bright futures.

There are a couple of linebackers playing at the Senior Bowl that could really help the Patriots. Paddy Fisher (American) of Northwestern has good size, is athletic and can play all three downs. His versatility makes him an ideal fit for the Patriots and what they like to do scheme wise.

Justin Hilliard and Baron Browning (National) of Ohio State are both versatile linebackers that can play leveled on first and second down and play on the line on third down or a blitz situation. Browning is a really good athlete who is explosive off the ball.

We all know how critical this off-season is for the Patriots. The roster needs to be upgraded. The Senior Bowl is a good place to start the re-tool. There is a lot of talent in Mobile that could help the Patriots.