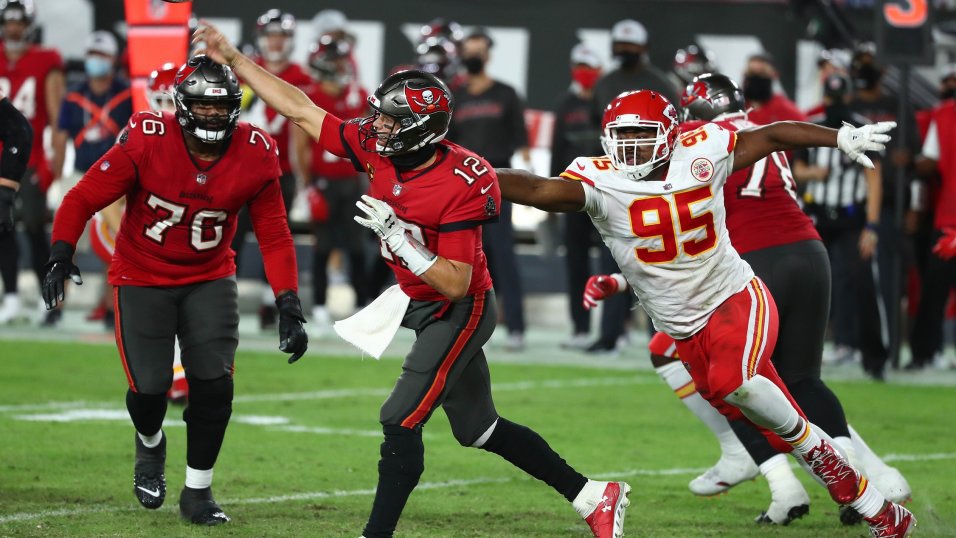 The Super Bowl is upon us. The Buccaneers and Chiefs will do battle for Super Bowl supremacy tomorrow night in Tampa. Before they do however, we have you covered with our previews.

We start by looking at all the positions and who has the edge. We will start on offense.

Quarterback: It is a battle of the GOAT versus The Kid. This will be the fifth meeting between the two quarterbacks. Each has two wins against each and Tom Brady has the only playoff win between the two. That came in the 2018 AFC Championship game.

At 43, Brady is playing at elite level but if you were going to size these two up at this point in their careers, you have to give Patrick Mahomes the edge. He is playing at an elite level and at 25, he poised to win his second Super Bowl. Mahomes is a magician with the ball in his hands and he can affect the outcome of a game in a variety of ways. He can beat you with his arm but also as a runner on play extensions or designed runs. He is playing the position about as well you could play it right now. Edge: Chiefs

Running Back: The edge goes to the Buccaneers in the running game. Leonard Fournette really came on in the second half of the season and has been a factor in the playoffs. He and Ronald Jones form a potent one, two punch that can impact a game both as runners and receivers.

Rookie Clyde Edwards Hellaire has been good for the Chiefs this season but he has missed time down the stretch. Kansas City will need him to be healthy and a factor if they want to win this game. Edge: Bucs

Wide Receiver: The Buccaneers have a deeper group of receivers in Mike Evans, Chris Godwin, Antonio Brown, Scottie Miller and Tyler Johnson. The best receiver in this game however plays for the Chiefs.

Tyreek Hill had over 200 yards receiving in the first half of the first meeting between these two teams. He was virtually unstoppable.

The Buccaneers have the deeper receiving corp but the Chiefs have the more explosive group so in many ways, I see this position as a draw. Both receiving corps are good and both will play a major factor in determining the outcome of this game. Edge: Draw

Tight End: Travis Kelce and Rob Gronkowski have gone back and forth in recent years for title of best tight end in the NFL. It is Kelce now but just like the receiver position, the Buccaneers are deeper at the position with Cameron Brate playing starter snaps.

I’ll give the Chiefs a slight edge because of Kelce but Gronk and Brate both could be major factors in this game. Edge: Chiefs

Offensive line: If Eric Fisher and Mitchell Schwartz were healthy, I might go with the Chiefs as having the edge. They are not, so I think the Buccaneers have the edge up front offensively.

Tampa’s offensive line was a perceived weak spot to the start the season but they have played well and they gotten better as the season has gone on. This group is healthy and they will play a major role in this game. Edge: Bucs

Defensive line: On paper, you would say the Bucs have the advantage because their front seven is so good. That would be a fair assessment however when I look at these two groups, I think they are pretty even.

The Chiefs have their own pair of dominate defenders along their defensive line in tackle Chris Jones and defensive end Frank Clark. Both will have a major impact on this game.

The Bucs play a 3-4 base and a lot of 2-4-5 so I am going to list Jason Pierre-Paul and Shaq Barrett as linebackers.

Overall, it is a draw when comparing these two lines. They are pretty evenly matched. Edge: Draw

Linebacker: The Bucs have a decided edge at linebacker with Devin White, LaVonte David, J.P.P and Barrett. This is the best linebacking corp in the NFL and the heart and soul of this vaunted Tampa Bay defense. They will play a major role in the outcome of today’s

The Chiefs linebackers are a collection of guys who play hard and fit well in Steve Spagnuolo’s defense but they will not have nearly the impact in this game that Tampa’s linebackers will. Edge: Bucs

Secondary: Tampa Bay’s secondary has been the “weakest link” of their team for most of the season but they have played well of late.

When I look at this match-up, the first thing that comes to mind is how highly underrated both of these secondaries are. Kansas City has the only star in either group right now in Tyrann Matthieu but both secondaries are aggressive, well coached and they ball hawk. Sean Murphy-Bunting and Antoine Winfield Jr are emerging stars for Tampa but when I compare these two units, I think they are pretty evenly matched. Edge: Draw

On paper, these two teams are pretty evenly matched. As always, games like this come down to who makes the most mistakes and turns the ball over. Kansas City won the first meeting 27-24 on November 29th, I would expect a similar score in this game. It could go either way.