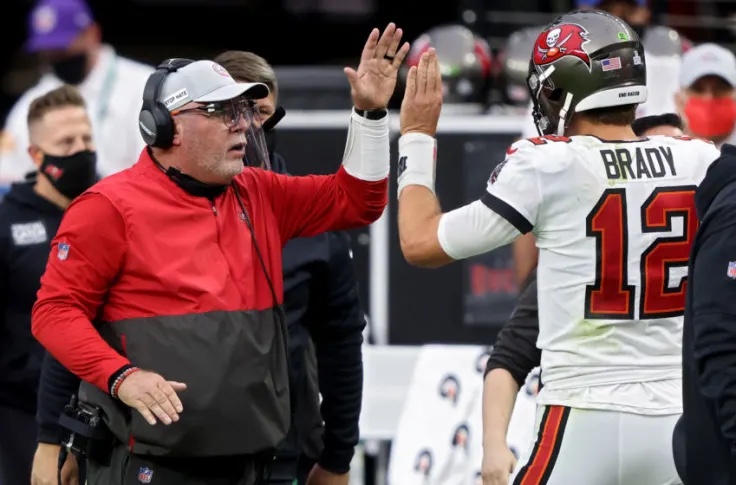 He may not want anything to do with him, but Bill Belichick should be thanking Tom Brady and the Tampa Bay Buccaneers this morning.

Todd Bowles, Byron Leftwich Bruce Arians and Tom Brady saved a little piece of Belichick’s legacy with their somewhat stunning 31-9 Super Bowl LV win on Sunday night. By embarrassing Andy Reid and the Chiefs in the manner in which they did, any talk of the Chiefs being the next great dynasty or Patrick Mahomes having a shot at being the next Tom Brady can be shut down for quite a while.

Belichick-coached teams have never been manhandled or completely shut down in the biggest game of the year the way the Chiefs offense was in this game. New England has never been in a Super Bowl decided by more than a touchdown and anyone watching on Sunday knew this one was over midway through the third quarter.

Devin Smith (12 tackles, 8 solo, 1 INT) was an absolute wrecking ball all night, while guys like Jason Pierre-Paul, Vita Vea, Shaq Barrett and Ndamukong Suh had Mahomes running for his life – literally – hitting him ten times, sacking him three times, picking him off twice and forcing him to scramble for 498 yards BEFORE throwing a pass. Bowles’ game plan will go down as one of the greatest in NFL history, right alongside Belichick’s plan for the 2001 Rams.

Despite that, no one will ever put Todd Bowles in the same conversation as Belichick, which makes the flip side of what happened last night the more important view point for Bill. Reid and his staff showed a glaring inability to come up with any adjustments to keep give their MVP quarterback a chance to make plays.

Now, Reid’s legacy takes a huge hit, not only because of what happened with his son Britt days prior, but he was out coached by Arians, Leftwich and Bowles in pretty dominant fashion. It also provides some ammunition to those that want to question last year’s title a bit more now too, as San Francisco seemed to choke it away more than Kansas City won it.

“They had a great game plan, but I could have done a much better job putting these guys in position to make plays,” Reid said after the game. “My guys busted their tail and we just…we didn’t…it just didn’t work. Give credit to Todd for the job he did, he got us.”

It was also staggering how easily the Bucs seemed to get in Kansas City’s head throughout the night. One of the most memorable moments to come out of this game was Brady chasing down Tyrann Mathieu to finish the war of words he had started. The Chiefs set a Super Bowl record with 95 penalty yards in the first half and had 11 for 120 yards in the game. The lack of discipline is obviously a direct reflection of Reid. Does anyone ever remember a Belichick team having that many issues controlling their emotions in a Super Bowl?

Brady’s seventh title without Belichick obviously stings for those down at 1 Patriot Place today, but not having the Chiefs repeat for the first time since you did it in 2003 and 2004 makes it worth the torture. Two Super Bowls in two years for Reid and Mahomes would have only ignited the talk of Kansas City’s dynasty and Reid’s underrated brilliance.

As it stands now, Brady has handed Mahomes losses in both of their playoff meetings and Reid is just a guy who went to four straight NFC championships at one point and lost two of the three Super Bowls he’s coached in.

The dynasty is safe for now.