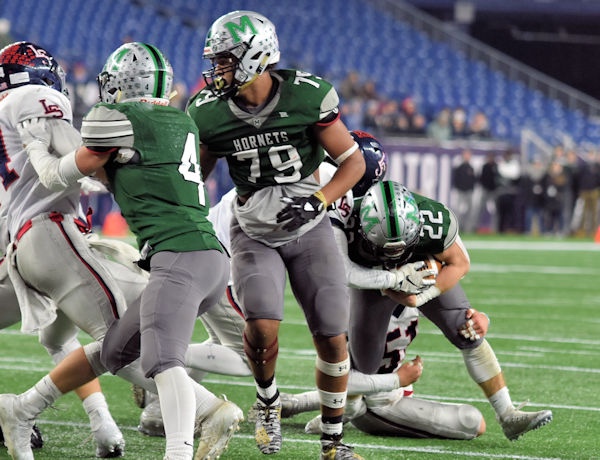 We continue our previews with a look at Division 2 which will once again be loaded top to bottom.

Here are my thoughts on Division 2.

1. Mansfield will once again be one of the top teams in the state with Michigan commit T.J Guy (OT/DE) back and speedy running back Cincere Gill. The Hornets have to replace several key contributors from their undefeated Super Bowl team but there is still plenty of talent on hand.

2. After fielding two young teams in 2018 and 2019, Bridgewater-Raynham is poised to be a player in Division 2. A solid senior class could be the impetus for a successful Fall II season.

3. When it comes to dynamic duos in Massachusetts, there might not be a better one than Natick’s Will Lederman and Jalyn Aponte. The quarterback, running back duo puts Natick near the top of the division and a favorite to win the Bay State League’s Route 9 division.

4. Reading will be a team to watch in D2 North. The continued development of sophomore quarterback James Murphy will be the focus as he continues to climb the ranks as one of the top players in the state.

5. Lincoln-Sudbury will be looking to make amends after a tough super bowl loss to Mansfield. Second year coach Jim Girard returns a lot of talent including QB/CB Collin Murphy who is one of the best two way players in D2.

6. Barnstable is coming under third coach Ross Jatkola. Led by Bentley commit Brenden Dowling, expect the Red Raiders to pound the ball and wear teams down.

7. Look for North Andover to continue to develop in D2 North. After an epic super bowl run in 2018 that culminated in a win over King Philip, the Knights are poised to get back on track thanks to quarterback WIll Schimmoeller.

8. Marshfield turned things around in 2019 and now coach Chris Arouca and the Rams will look to take the next step and become a player in D2 again. The Fall II season will play a pivotal role in their team-emergence.

9. Second year coach George Peterson will try to get Chelmsford on the map during this Fall II season. The Lions haven’t been to the promise land in a while but the former Lexington coach is poised to return the program to dominance.