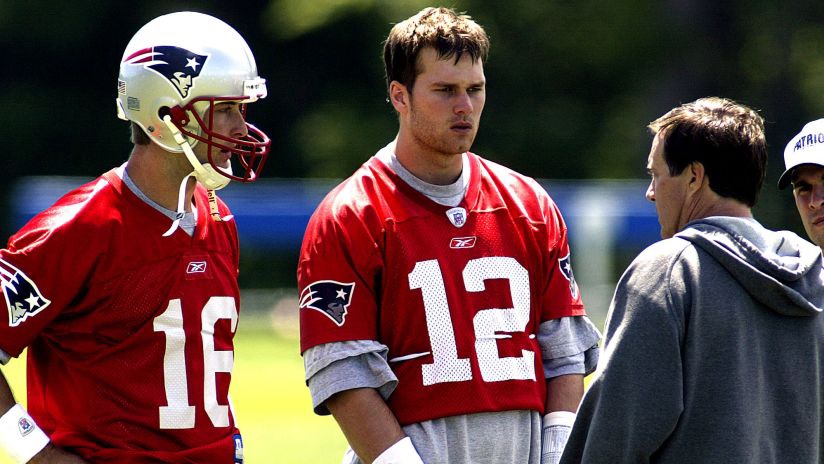 Many Patriots pundits and fans alike have speculated that Bill Belichick does not value the quarterback position. I am not sure I would go that far. I think he does but there is a pattern of addressing the position in his history which could shed some light into how he will address the position this off-season.

Here are three observations I have made about Belichick and how he addresses the quarterback position.

1. Prefers having a veteran replace an established starter: In Belichick’s career as a head coach, he has replaced an established veteran with a veteran twice in his career. He replaced Bernie Kosar in Cleveland with Vinnie Testaverde and he replaced Tom Brady in New England with Cam Newton.

In the case of Kosar, it was by choice. He wanted to move on and he hand picked Testaverde. In New England, Brady left the team in a lerch by leaving as a free agent last March. Belichick signed Brian Hoyer but clearly wasn’t comfortable with the idea of starting either Hoyer or Jarrett Stidham so he signed Cam Newton.

Belichick is this generation’s Tom Landry. He believes in his offensive system and in his mind, anyone can play quarterback in his system. It worked with Testaverde in Cleveland but as we saw last season, it did not work with Newton. He struggled.

Despite Newton’s struggles last season, there is speculation he could be back with the Patriots in 2021. I don’t see the need for a reunion but again, it is about the system. If Belichick believes that Newton would be more comfortable in his second year in the system, you might see him in a Patriots uniform again this season.

2. If you are 6-5 or taller, you can’t play quarterback for Belichick: Belichick prefers his quarterbacks be in the 6-1 to 6-4 range. He doesn’t love the big, tall, strong armed pocket passer. He wants guys that are smart, can manipulate the pocket, make quick, accurate decisions and take care of the football.

Big arms don’t impress him and neither does size. Just look at the 12 quarterbacks he has drafted in his career and you will see that with the exception of Ryan Mallett and Kevin O’Connell, he prefers a certain body type.

Here are the 12 quarterbacks Belichick has drafted in his career by size and the round and pick they were drafted at.

As you can see, Belichick likes quarterbacks in the 6-3-6-4 range mostly. He feels that is the ideal size because they are tall enough but their height doesn’t affect their ability to be athletic. Does this mean he won’t draft a quarterback 6-5 or taller? No. He has in the past but his preference would be to stay under that number if he can.

Critics of my theory will point to Brady and his lack of athleticism. It is important to note, that Belichick values pocket manipulation more than he values running ability. Brady is the greatest quarterback of all time for a variety of reasons. Manipulating the pocket and avoiding sacks is one of those reasons. He the best of all time at that.

3. Round matters: It is well documented that Belichick has never drafted a quarterback with a top 60 pick and chances are, he won’t this year, even though he should.

I wrote about this last year. Belichick has a sweet spot when it comes to where he drafts quarterbacks. It is the 3rd and 4th round. Belichick has drafted 6 of the 12 quarterbacks he has taken in these two rounds. It is where he is more than likely going to draft a quarterback this year.

Of course it is Belichick and he is a wild card when it comes to the draft. He could throw us a curve ball and draft a quarterback in the second round but I just don’t see it in the first.

It is not that Belichick doesn’t value the quarterback position, it is that he values every position on the roster. He believes that any quarterback can fit his offensive system as long as they are smart, accurate and take care of the ball.

He doesn’t care that we think he should take a quarterback in the first round. He will do whatever it takes to build a roster that is flexible and sustainable. One of the ways to do that is to not overpay the quarterback. That is a big reason why he will more than likely pass on one in the first round.

I know Belichick’s approach to the quarterback position can be frustrating for Patriots fans but this is how he has done business throughout his career. He will not rush things. He will take his time and find the guy that best fits system and what he is looking for.

If you trust Bill as much as you say you do, then you need to trust him on this one. You have to believe that he will solve the quarterback dilemma. One way or another.