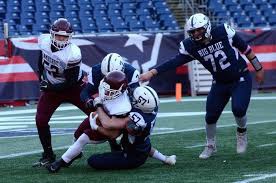 Our next preview focuses on Division 5 which is home to some big name programs with a long history of tradition and success.

Here are my thoughts on Division 5.

1. Holliston will once again be the favorite in the Tri-Valley Large. The Panthers return several key starters including two way lineman and team stalwart Zach Athy.

2. Scituate returns several key starters along the offensive line that will allow the Sailors to be potent on offense again. Factor in a defense that flys around and make plays and the Sailors will one of the best teams in the Patriot League.

3. Swampscott won the Division 5 Super Bowl in 2019 and return two key members of their receiving corp from that team in Andrew Augustin and Jonathan Oriakhi. Replacing quarterback Graham Inzana will be key for Big Blue.

4. Legendary Northbridge coach Ken LaChappelle has a talented senior class to work with and a young quarterback named Ryan Boyce that can make his spread offense go. The Rams should be fun to watch.

5. Amherst lost to Swampscott in the D5 Super Bowl in 2019 but coach Chris Ehorn returns a talented and experienced offensive line that will pave the way for the Hurricanes.

6. Losing Geoffrey Jamiel hurts but Dennis-Yarmouth has a good skill group returning and should once again be one of the top programs on the Cape.

7. Canton has a new head coach in Anthony Fallon. The Bulldogs are coming off of two of the best seasons in program history so it will be interesting to see if Fallon can keep it going.

8. Staying in the Hock. Foxboro will be a player in the Davenport Division. The Warriors are skilled and have a stout front seven defensively that should give opposing offenses problems.

9. Somerset-Berkeley should be one of the favorites in the South Coast Conference thanks to a ball control running game and an aggressive defense.

10. West Springfield will once again be one of the top programs in Western Mass. Coach Chad Labonte returns a good team led by quarterback Ryan Russell.