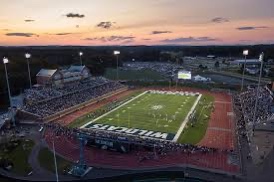 DURHAM – After over 400 days of waiting, this wasn’t how the New Hampshire football team envisioned things going.

With head coach Sean McDonnell back on the sidelines, the Wildcats hosted Albany in the first ever March football game for the CAA and the “season opener” for this strange six-game schedule on Friday night.

UNH had the ball deep inside Great Danes territory with just seconds remaining on the clock and trailing by four after a wild turn of events in the final moments, but Albany was able to keep the the Wildcats out of the end zone and held on for a 24-20 win.

“It ain’t about me. It was good to be back out there, but I’m disappointed, I’m really disappointed,” McDonnell said when asked how he felt back on the sidelines after taking a leave of absence for a cancer diagnosis a year ago. “We were sloppy tonight and it starts at the top. Obviously, I didn’t communicate enough how important the little things are to win a game.”

The sloppiness McDonnell was speaking of was mostly referring to the 12 penalties for 95 yards that UNH committed.

“We’ve got to do a lot of teaching, a lot of coaching and a lot of learning (during the bye week) and we’ll see what Delaware brings,” McDonnell added.

Trailing 24-20 with just over a minute left, the UNH defense forced Albany to punt from deep in their own territory. The snap was low and bobbled, but somehow Albany’s punter managed to get a kick off despite the ball being on the ground. After some discussion, the referees called an illegal kick, giving the Wildcats possession at the Great Danes 7 1/2 yard line.

Four plays later after penalties pushed them back to the 17,  quarterback Max Brosmer (20/35, 128 yards, 2 TD) tried to hit Jack Cavallaro in the back right corner of the end zone on 4th-and-goal but the play was broken up. Two kneel downs later sent Albany back to upstate New York with a huge win.

“We had multiple opportunities to put the ball in the end zone in the end and couldn’t,” said Brosmer. “We had a good game plan and the defense played a good game, we should have picked them up there in the end.”

Early on, McDonnell and his staff couldn’t have asked for a better start as UNH marched 68-yards in 14 plays and chewed up 6:55. The opening drive ended with Brosmer hitting Sean Coyne from 4-yards out with a beautiful fade into the back right corner of the end zone and Jordan Conn added the PAT for a 7-0 lead.

Albany went three-and-out its first possession, but an unsportsmanlike penalty kept the drive alive. That drive soon turned into a 14-play, 75-yard march that took 6:38 and ended with Jeff Undercluffer (23/26, 192 yards, 3 TD) hitting Mike Gray for a 20-yard TD that made it 7-7 after one.

The Wildcats’ second drive was similar to the first, a methodical march from their own 30 down to the Albany 20. 14 plays later, UNH unfortunately turned the ball over on downs, giving the ball back to the Great Danes with 2:44 left in the half.

After a three-and-out, redshirt freshman Zedane Williams blocked the ensuing punt and fellow freshman Justin Jameson fell on it in the end zone, giving UNH a 14-7 lead at the half.

Albany opened the third quarter with an impressive 11-play, 74-yard drive and tied the game at 14-14 on an 18-yard TD catch by Tyler Oedekoven. Two plays after that, Brosmer was strip sacked and the Great Danes recovered at the UNH 22. It was soon 21-14 Albany after a a 10-yard TD catch and run out of the backfield for Karl Mofor. Mofor entered the game considered one of the best backs in FCS, but UNH held the Great Danes to just 32 yards rushing all night in what was one of the few bright spots.

Albany pushed the lead to 24-14 with a 37-yard field goal late in the third, but with 9:36 remaining in the game, UNH had some life when junior Niko Kvietkus came up with a strip sack and sophomore Oleh Manzyk recovered at the Great Dane 24. Two plays later, Coyne hauled in a 24-yard TD catch, cutting it to 24-20 and setting up the wild final few minutes.