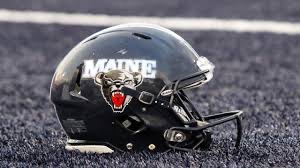 Much like their rival UNH, the Maine football program had a much different plan for the start of this unprecedented spring season.

Playing for the first time in over 400 days, Maine visited Delaware on Saturday afternoon and got blown out 37-0 in the first game of the season for these CAA rivals.

Things went south in a hurry for the Black Bears on Saturday, in fact, they couldn’t have gone south any quicker than they did when Delaware’s Dejoun Lee returned the opening kickoff 87-yards to the house for an immediate 7-0 lead.

With 10:45 left in the second, the Blue Hens went up 10-0 when Ryan Coe hit a 38-yard field goal to cap an eight-play drive. A 21-yard TD reception from Gene Coleman from quarterback Ryan Anderson (STATS) made it 17-0 at the half.

Maine did get an interception in the first half from Jordan Swann for the Black Bears’ lone highlight of the first 30 minutes. Delaware pushed its lead to 20-0 on a 45-yard field goal early in the third then made it 27-0 on a 12-yard touchdown run from Lee.

Another Coe field goal early in the fourth quarter made it 30-0 Blue Hens and Delaware capped the scoring with 11:09 left in the game on a 1-yard TD run by Nolan Henderson.

While the scoreboard didn’t reflect it, there were some pretty noteworthy performances – particularly on the defensive side of the ball – for Maine to hopefully build off of moving forward. Adrian Otero had 11 tackles, Deshaw Stevens added 10 and Robby Riobe had seven of his own. The Black Bears defense also held the Blue Hens to 146 yards passing, but did give up 224 yards on the ground.

Offensively things will have to get better in a hurry for Maine, especially with Albany coming to town next week. The Black Bears had just 112 yards of total offense (61 passing yards, 51 rushing yards) and just six first downs. Maine was 2-14 on third downs and held the ball for just over 21 minutes compared to Delaware’s 38:14. Quarterback Joe Fagnano had 10 completions, three of them to Andre Miller, two to Trevin Ewing and one to Shawn Bowman. Tavion Banks averaged 3.8yards per carry on the ground in a smalls ample size as well.

Perhaps the two most frustrating things for coach Nick Charlton are the seven penalties for 71 yards and giving up 21 first downs.

While it wasn’t the start anyone wearing blue, white and black envisioned, Maine won’t have much time to dwell on the slow start since the Great Danes will be riding high when they visit next Saturday at noon. Albany’s offense wasn’t anything special against UNH, and the Wildcats admittedly killed themselves at times, but Maine will surely have to have a better showing if they’re going to avoid a second straight blowout and an 0-2 start to this short season.