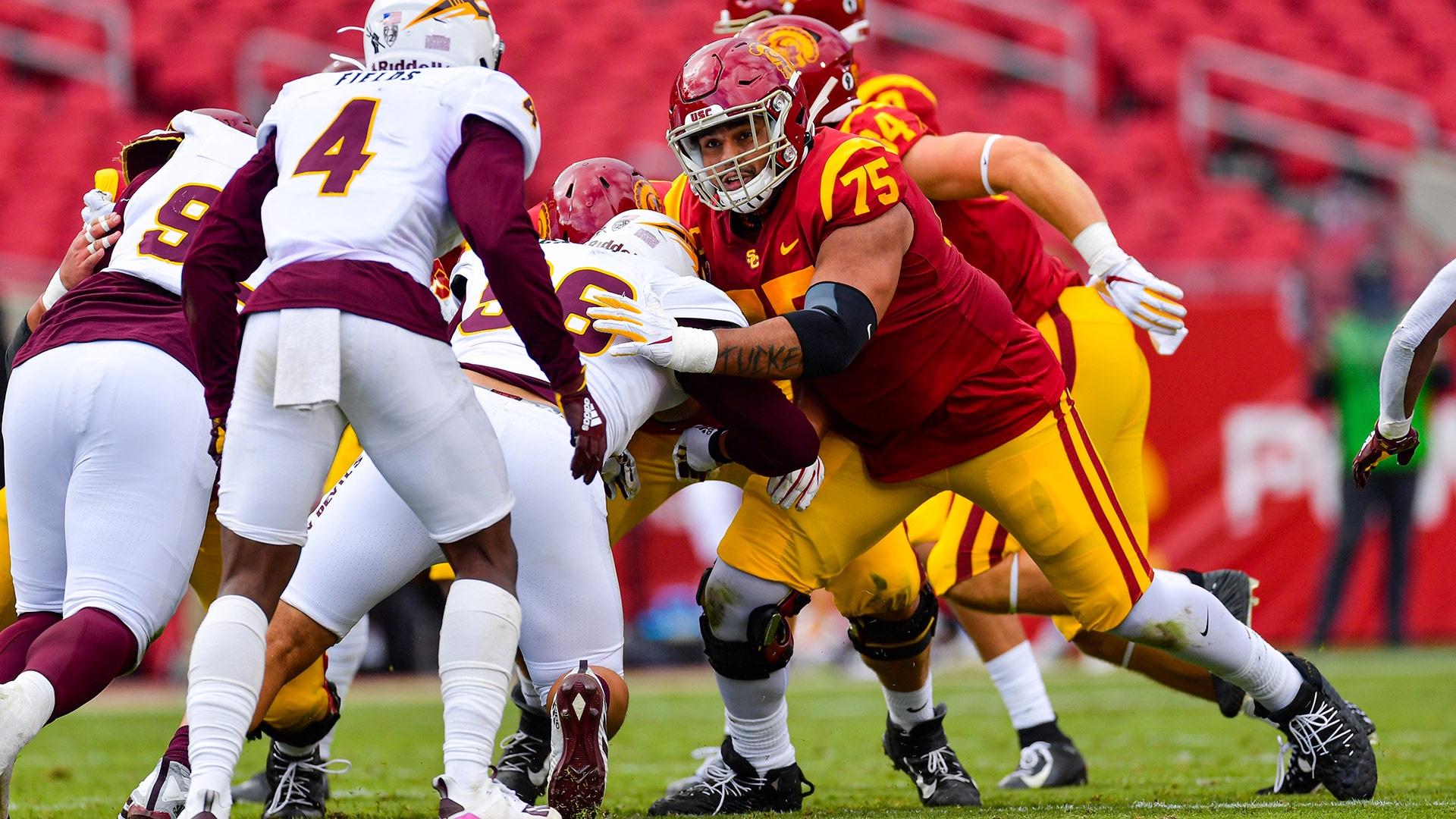 The Patriots value versatility more than any other team in the NFL. All teams value it, but Bill Belichick places a premium on it.

When it comes to versatile offensive lineman in this draft class, no one is more versatile than USC’s Alijah Vera-Tucker.

During his time at USC, Tucker played both guard and tackle. At 6-4 315, he has the size and the requisite physical tools to be effective. It is Vera-Tucker’s versatility and athleticism that make him one of the top offensive line prospects in this draft.

With Joe Thuney an unrestricted free agent, the Patriots may pass on re-signing and may opt to replace him and his versatility with a similar player. The only player in this draft that can play both tackle and guard at a high level is Vera-Tucker. He could be the ideal fit.

Here is my scouting report on Alijah Vera-Tucker.

Initial Quickness: Vera-Tucker is quick and efficient on the snap. Gets into proper position and wastes no motion. Resets the line of scrimmage and gets inside hand position on a defender quickly.

Run Blocker: Vera-Tucker plays with a low pad level for his size. Does a good job of squaring up defenders on single blocks and gets vertical and lateral movement. Athletic in space. Can come off a scoop double and seal a flowing linebacker. Needs to play with better balance. Can get caught flat footed at times.

Pass Blocker: Vera-Tucker sets quick at guard and has an effective punch and recoil. Moves well laterally and can adjust to secondary pass rush moves. Does a good job of cutting off the angle as a tackle against speed rushers. Has good feet and can pop back inside on a double move.

Use of Hands: Vera-Tucker has strong hands. He gains inside hand position routinely and can control a defender. Does a good job of gaining separation and maintaining it.

Strength: Plays with good functional strength but he is far from a mauler. Can control defenders one on one and finish to the whistle but he doesn’t dominant on film.

Explosion: Good athlete for his size. Jumps off the snap and engages a defender quickly. Plays with good leverage and has pop in his hands.

Vera-Tucker is a quality prospect that offers scheme versatility and can be an effective blocker in a man gap or zone blocking scheme. If he is the best player on the board at pick 15, he would be a sound pick by the Patriots.