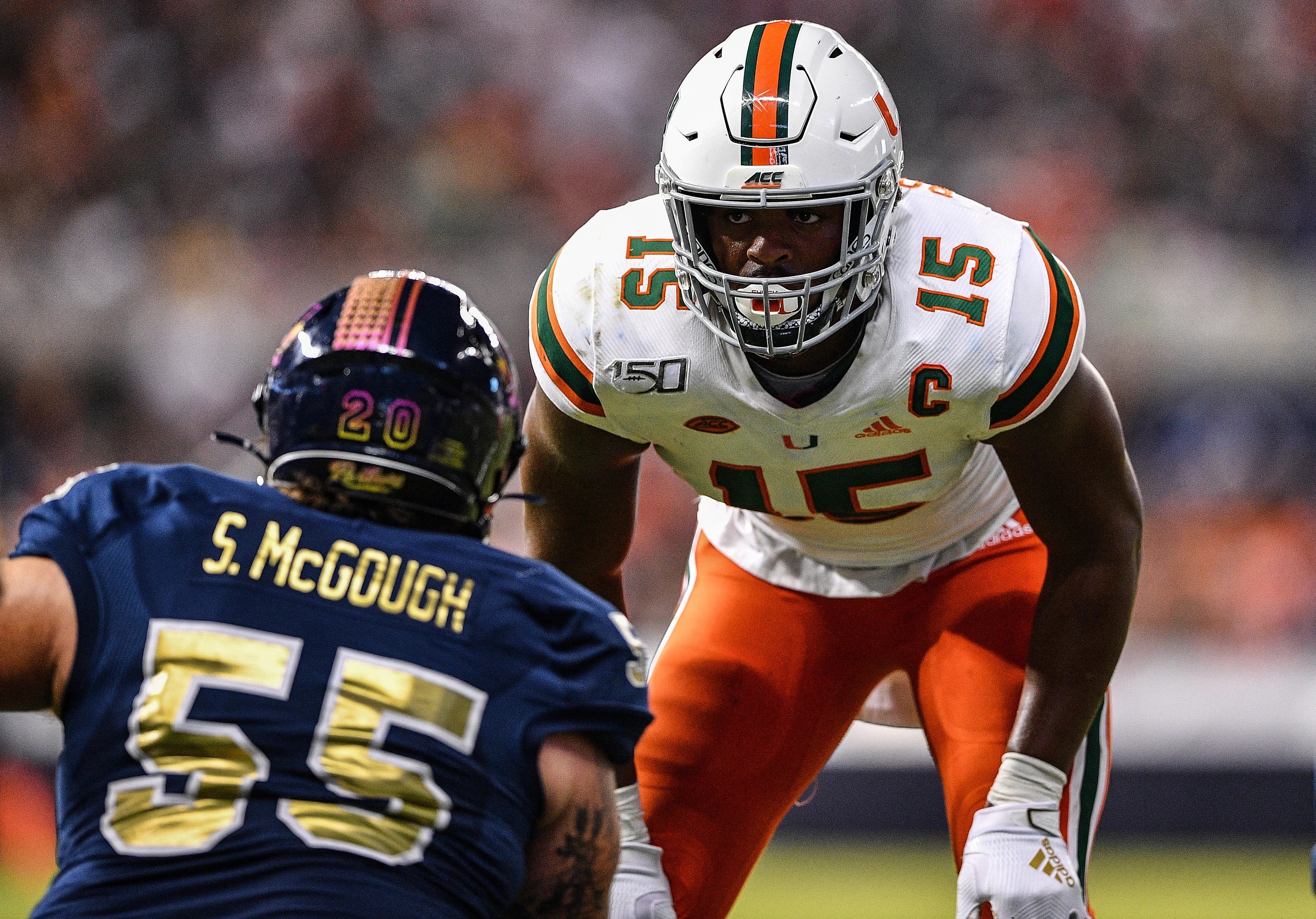 Gregory Rousseau didn’t know a thing about defensive line play when he arrived at the University of Miami. That is because Rousseau was a wide receiver and safety in high school.

Rousseau hit a growth spurt of sorts while at Miami and transitioned to defensive end where he put together a dominate season in 2019 finishing with 15.5 sacks.

Rousseau opted out of playing last season due to COVID-19. So evaluators in essence have one full season of tape to evaluate him on. The sample size is limited but Rousseau was dominant and that is why he profiles as a top 15 pick.

Vs. Run: Rousseau is best suited in a one gap gap defense where he can get his hands on an offensive lineman and take a two way go or squeeze down and pursuit. Does a good job of using his length at the point of attack to set an edge. Plays with power and can force running backs to cut back inside.

Pass Rush: Rousseau profiles as a power pass rusher because of his length and his ability to get hand leverage and control blockers. He showed an ability to convert speed to power as the 2019 season went and he was more explosive. Demonstrates good hand work and an ability to reset and get inside on a double move.

Pursuit: Rousseau moves well laterally and can slow play from the backside. Takes good angles and works through blockers. He is not an explosive finisher from the back side of plays.

Tackling: Rousseau is a fine tackler but needs to bend more and take better ankles. He reaches and lunges too much at times.

Initial Quickness: Rousseau’s get off doesn’t pop out at you on film. He is quick off the ball and uses his length to close the gap between him and the blocker.

Recognition: Rousseau does a good job of recognizing blocks and attacking them but he is still developing in this area. He has a tendency to slide into kick out and seal blocks. Needs to better read down blocks and adjust his path.

Neutralize Blocks: As I mentioned earlier, Rousseau is best suited in a one gap system where he can take on half the blocker, squeeze down and shed. He plays with good power and his length is an advantage but needs to take on kick out and seal blocks better.

Scheme Versatility: Rousseau profiles as a nine technique defensive end in the 4-3 but his versatility allows him to kick inside in sub packages and play in a two point stance as a five technique end.

Rousseau has tremendous upside but he will need time to develop. If the Patriots drafted him at pick 15, he would be a high risk, high reward pick. Physically, he is a top ten talent. It is all about his development. If he maximizes his potential, he could be a force. Profiles similar to Julius Peppers but not as explosive.