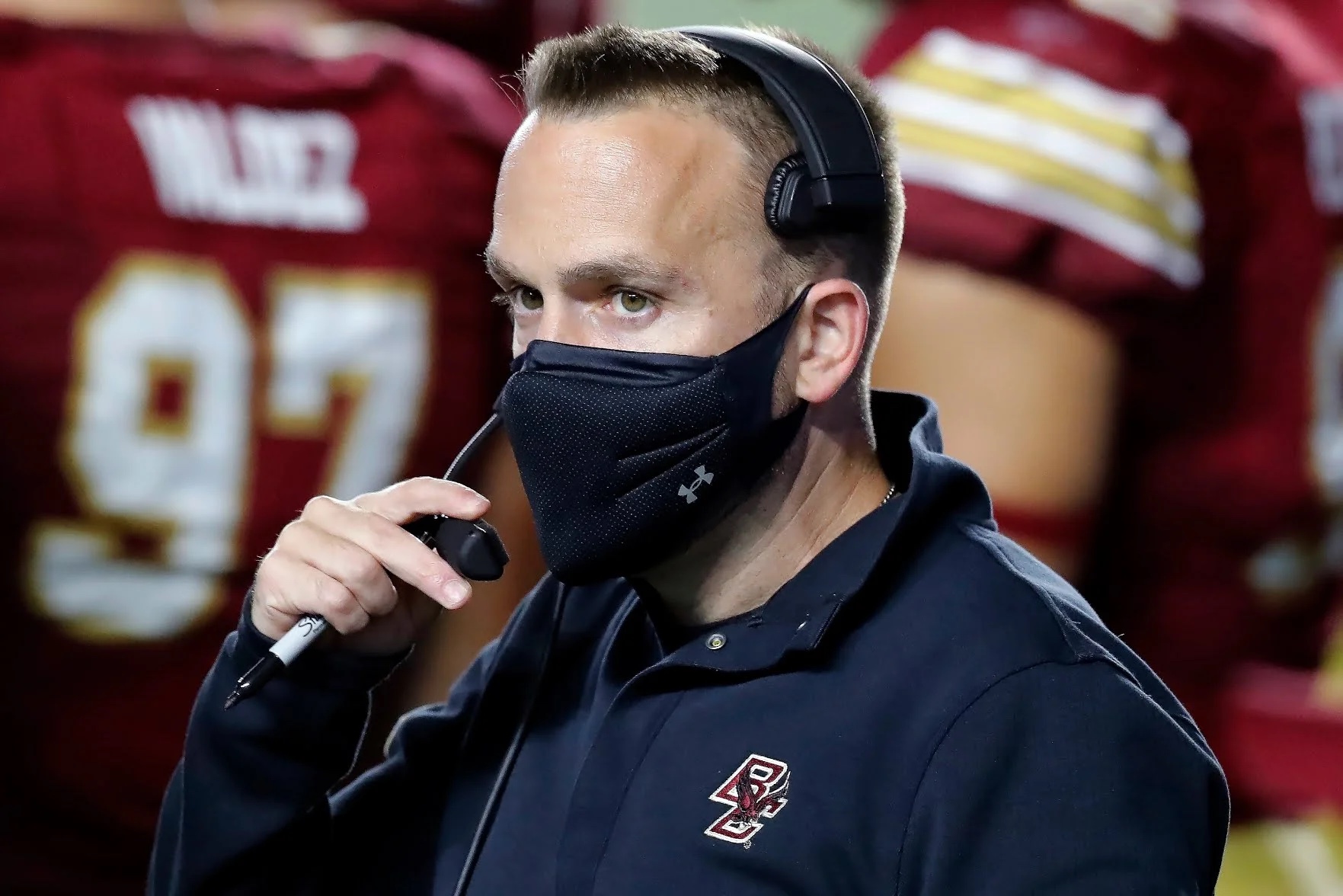 On Saturday the Eagles will officially open the spring ball season with their first practice. Before that, head coach Jeff Hafley met with the media on Tuesday afternoon to discuss a number of topics. There was quite a bit of interesting stuff that Hafley had to say, so let’s get right into it:

HAFLEY ON THE COACHING STAFF REMAINING IN TACT

After a strong  first year, it wasn’t surprising that some of the coaches on Hafley’s staff drew interest from other big time schools as well as the NFL. In a testament to what Hafley has already built, there wasn’t a single coaching departure despite some of them having some great offers elsewhere.

One of those coaches was Azzar Abdul-Rahim, who was given the title of “associate head coach” heading into this season.

“One of the most important keys I’ve mentioned to you guys to me is that you win with good people,” Hafley said. “I’ve got to thank our staff. Keeping our staff together in my opinion is more important than anything we can do in the offseason. We had guys with really good opportunities. They came in and discussed a lot about them, and we didn’t lose any of them. That says a lot about Boston College and that they love our players.

“Coach Azzar had a chance the opportunity to go become a Power 5 defensive coordinator and he opted to stay here. He’s done an incredible job with our players and our DB’s. Everyone talks about him as a great recruiter and he is, but he’s a better coach and person and I think people are going to start to see that. We promoted him to be our associate head coach. I go to him for a lot of different things, he deserves it. He’s got a great grasp the team, a great feel for the team and I’m really excited for him and his future here and I’m very excited he’s staying with us.”

Hafley also said that Matt Applebaum had a chance to go to one of the “top teams in the National Football League” but opted to stay as well.

“I think it goes back to having good people here and we’ve got good kids,” Hafley added. “Coaches want to coach them and our coaches believe we can win games so that really, really excited me.”

A year ago Wednesday was the final time that BC players and coaches met or worked out together as a team before going home. Strength and conditioning coach Phil Matusz had his work cut out for him developing ways for guys to stay in shape during the pandemic whether it was in a basement or a backyard. This offseason has been a bit easier, but Hafley talked about how valuable Matusz has been in these crazy times.

“I can’t thank him and his staff enough for everything they’ve done,” Hafley said. “Where Phil I think did a phenomenal job was – he didn’t just have to all of the sudden get it going when we got back (last year) because he spent so much time with his staff when we were away on Zoom doing everything he could for those kids so they were working out. The guys were trying to eat right and were in constant touch with him whether it was in their basement, in their backyard or on a driveway or they found somewhere to work out. Phil got really creative and thought outside the box.

“This year, we pushed spring ball back to the 20th which is late, because we wanted to give Phil more time to develop our team. I think the development physically and mentally in the weight room is as important as anything we do as coaches on the field.”

HAFLEY ON DEALING WITH COVID…PART II

The Eagles set an incredible example for the rest of the country last year while dealing with Covid-19. BC had just one positive test that came at the very end of the season and didn’t have a single negative result during any game weeks.

While it seems like things are shifting back to normal with the idea of fans in the stands starting to gain steam nationwide, Hafley reminded everyone that things are still going to be very different for his team for the foreseeable future.

“We’re still fighting Covid,” he said. “We’re spending three different times with three different groups coaching the same thing over and over. We haven’t really been able to bring the team together yet, which is why I’m so excited for Saturday. We’ve had all these smaller group meetings still. Everyone still isn’t allowed in the locker room at the same time. I still haven’t had an in-person team meeting in the offseason, team meetings are still on Zoom.

“It is still a bit different. I can’t wait to go into our team room one day and actually meet with them face-to-face together, but for now it is what it is and we’re doing the best we can.”

HAFLEY ON THE POTENTIAL FOR AN EXPLOSIVE OFFENSE

That’s what Hafley faced last year at this time, unsure if Phil Jurkovec was ready to become the guy yet. Kobay White was injured early in the year as well, so Hafley and offensive coordinator Frank Cignetti Jr. weren’t able to see just how good the offense could be despite CJ Lewis, Zay Flowers and Jaelen Gill all exploding onto the scene.

Now, with an entire offseason and a healthy White back, the sky is the limit for just how good this BC offense might be.

“Can’t wait,” Hafley said when asked just how excited he and his staff are about the offense. “Excited to take the next step. To have a quarterback in his second year be able to digest it, learn from his mistakes on tape, kind of take a deep breath and now he goes into spring ball and he knows he’s the scheme, he knows the players, he knows the coaches and he actually knows he’s the starting quarterback. Not that he’s not competing for a job, but he’s going to go out with the ones. It takes a little pressure off of him.

“That’s the same with a lot of the guys. I don’t even think I knew everyone’s names heading into spring ball last year truthfully. I didn’t know which way was up at that point. It was literally a year ago (Tuesday) today we had our last team meeting. The offense with the O-line returning, quarterbacks, receivers and staff, I’m excited.”

HAFLEY ON FCS AND HIGH SCHOOL FOOTBALL IN MARCH

Hafley has been the head coach for over a year now, but still has barely met many of the local high school coaches despite having a hell of a recruiting run.

Now that local FCS teams like UNH, URI, Maine, Bryant, Merrimack and Holy Cross are playing along with all the local high schools, Hafley and his staff are trying to build relationships and have also found an even deeper respect for the teams playing football in March.

“I want to make sure we’re reevaluating those kids that didn’t have a season, which is awesome to see,” he said. “I’ve talked to some of the coaches, just really excited for them. One thing that our staff is doing right now is we’re putting on a clinic for high school coaches and we’re trying to help them out. I barely went to any high schools. Since I’ve been the head coach here I’ve recruited through Zoom, so we’re trying to reach out and be there for the coaches and help those local coaches as much as we can.

“I’ve caught a couple (FCS) games on TV, but maybe I don’t get all the channels, I haven’t been able to find all of them, but you turn on the TV the other night and it’s awesome New Hampshire’s playing in 10-degree weather. You respect and appreciate what those coaches and kids have done in limited time with limited training. Just using New Hampshire as an example, playing in the freezing cold, in front of no fans, barely being televised nationally, I respect that so much and I respect those players and coaches so much, so for me that makes it a lot of fun to watch.”