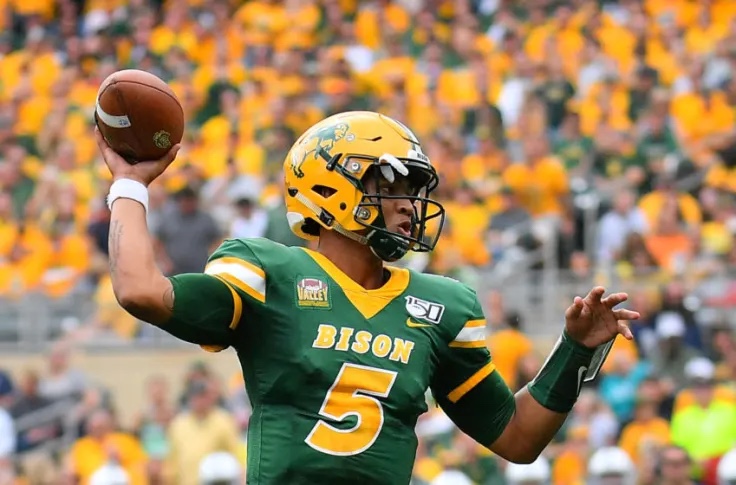 Trey Lance is the most intriguing prospect in this draft. At any position. He has the size (6-4 230), the athleticism and arm strength necessary to become a pro bowl quarterback in the NFL.

The only two issues with Lance are his lack of experience and the competition he has faced. If a team is willing to draft him and sit him, it is not a stretch to think that he could be the steal of the draft.

Lance is a top five talented in this draft and it would not surprise me to see him go in the three to five range with so many teams needing quarterbacks and being willing to trade up.

Here is my scouting report on Trey Lance.

1. Arm Strength: Tremendous arm strength. The ball jumps out of Lance’s hand. He can make every throw in the playbook in all three levels. Shows good anticipation on timing routes and can locate the football properly on a receiver. Can fit the ball into tight areas in between defenders in zone coverage. Throws the staple hash to hash comeback with ease and shows good anticipation and touch on post and corner routes.

2. Drop: Smooth, quick and compact. Doesn’t waste motion. Gets to the top of his drop quickly and sets up. His whole body is in rhythm. Does a great in his cradle of staying in sequence. Understands that playing quarterback it is a whole body movement.

3. Accuracy: Displays good accuracy in all three levels. Lance has a quick release and fits the ball into spots against zone coverage and places it for the receiver versus man coverage.

4. Field Vision: Gets through his progression quickly and efficiently. Doesn’t waste time hanging on a read. He moves his eyes quickly, processes his progression and gets the ball out.

5. Running Ability: A dual threat who is just as effective as a runner as he is a passer right now. Rushed for 143 yards and two touchdowns in his only start in 2020 against Central Arkansas. Runs with good balance and power. Has shown an ability to break a defender down and make him miss in space. Displays good lateral quickness and has the speed to separate in the open field and gain yards. Probably won’t run as much in the NFL but which ever team drafts him will use him a lot like the Buffalo Bills have used Josh Allen.

6. Delivery: Short and compact. Lance does not waste motion. He loads the ball quickly and get it out using the appropriate arm angle.

7. Ball Handling: Displays good fakes. Whether it is a token fake or a hard fake, Lance does a good job of coming out of it, setting up and getting his eyes down field. Comes off bootlegs and nakeds and presses the line of scrimmage quickly.

8. Leadership: By all accounts, his teammates love him. Works hard and leads by example. Unassuming type who has the mental make up to play at the next level.

I truly believe that the Patriots like Lance and I do see a scenario where they could trade up to get him. I know Bill Belichick has never drafted a quarterback with a top 60 pick. If there was ever a year, this is the year. The 2021 class is loaded at the top. Lance is just skilled as Trevor Lawrence and is a better athlete. If the Patriots are willing to give up future draft compensation, then they would be able to move up into the four to seven range and draft Lance.

People love comps. If you want my comp, I think Lance is a taller, more athletic version of Donovan McNabb. I know people want to comp him to Josh Allen but he isn’t as big. Think McNabb or Carson Wentz. He falls somewhere in between those two but a better athlete than both.

Regardless of who drafts Lance, they must sit him for a year otherwise it is not going to work. He needs to be given time to develop.