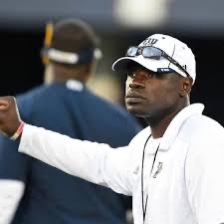 We’re only three practices into the spring portion of Boston College’s 2021 season, but there’s been plenty of reason to be optimistic this early if you’re an Eagles fan.

We’ve talked about the return of Phil Jurkovec and a plethora of offensive weapons, but what about the defense? Sure, the losses of guys like Isaiah McDuffie and Max Richardson will be tough, but second-year defensive coordinator Tem Lukabu is still here and his value to this program can’t be understated.

A year ago, the Eagles were aggressive and showed quite a bit of speed at every level. With guys like All-ACC DB Brandon Josh DeBerry returning to lead that secondary and Lukabu still around to serve as the mastermind behind it all, sleeping on this BC defense would be a huge mistake. Of course, having the defensive back wizard himself in coach Hafley doesn’t hurt either.

“That’s the beauty of our program, we have a true program,” Lukabu said when asked how the Eagles would replace the leadership and skill of guys like Richardson and McDuffie. “The train keeps rolling along regardless of who the people are, regardless of what jersey numbers are out there. It’s still about for the team. It’s still about tough love, compete. The message does not change, it’s just different people doing it now.

“Are we going to miss those guys? Yeah, we’ll miss them as people. The reality is that’s how it goes in a real program. The next man up has to be ready to go and that’s the feeling I’m getting right now.”

The key word that’s been thrown around early this week is continuity and DeBerry talked about its significance a bit more on Thursday.

“It’s definitely important,” DeBerry said. “Last year we were still getting a little used to things and coaches and players were feeling each other out. Now, we’ve got a different dynamic. We’ve got a good feel for the coaches and they’ve got a good feel for us, so it allows us to be comfortable. It allows us to play harder, play faster, play better and trust the coaches even more so that we can go out there and be a better unit as a whole.”

Even Zay Flowers had to acknowledge on Thursday that there is a whole different feel and play making element surrounding the defense this spring, although he did say he’s got a secret to get around them.

“I usually just beat them with speed every time,” he said with a grin. “The defense is playing really good right now. Everybody’s just out here competing. Receivers are getting better DB’s are getting better, it’s going to be a great second year.”

Perhaps the biggest key to BC’s defense this season is going to be learning from last year. Having the staff and players back is one thing, but improving and correcting mistakes in year two is critical. Earlier in the week, offensive coordinator Frank Cignetti Jr. said year two is a chance to “master” the offense.

Well, if Lukabu can get his guys to earn an M.S. or an M.A. in BC’s defensive strategy, it could be a special season on both sides of the ball.

“The thing we consistently harp upon and want to keep hitting is our fundamentals,” Lukabu said. “There’s also going to be an emphasis on playmaking. At the end of the day that’s the bottom line. It’s all fine and dandy to be around the ball, but when it’s you and the ball, or you and the quarterback in your arms, you’ve got to get him down on the ground.

“We’re trying to take that evolutionary step . It’s about making marginal gains from last year. At this point a lot of the guys that played know what to do, we’ve got to get it done, especially in crunch time.”