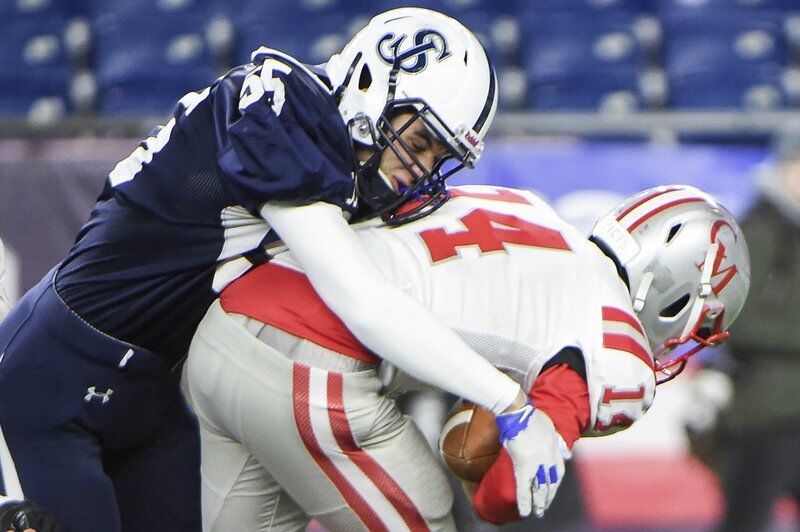 St. John’s Prep and CM meet again in what has become the state’s best rivalry.

Week three of the Fall II season is upon us and there are some intriguing match-ups on the schedule this week. last week was all about Thanksgiving rivalries. This week is all about some of the new rivalries that have developed and some good old fashioned rivalries. Here are our top games to watch in week three.

#14 St. John’s Prep (1-1) at #1 Catholic Memorial (1-0): The Eagles are young and it showed in key stretches last week in their loss to B.C High. Catholic Memorial has had two weeks to prepare since they didn’t play last week. The Knights have plenty of motivation to lay the lumber to the Prep after losing back to back Super Bowls but something tells me this game will be close.  The Prep has to find a way to run the football and shorten the game. Easier said than done against an athletic CM defense that can run and make big plays on both sides of the ball.

Billerica (1-0) at #11 Tewksbury (1-0): This has the makings of a great game. Two programs that are stylistically different but still play a physical brand of football. Billerica got people’s attention with their win over North Andover. Now it remains to be seen if they can capitalize on that win. It will be tough to win at Tewksbury but if Duane Sigsbury’s team does it, it is a sign that the program is on it’s way back.

#2 Central Catholic (2-0) at Methuen (2-0): Could be the game of the week. Central will be without Jermaine Wiggins but the Red Raiders still have plenty of weapons. The Rangers have enough talent to pull off the upset but they will need to play a nearly flawless game in order to get the win. The winner of this game take sole possession of the MVC Large.

#6 Xaverian (2-0) at # 16 Brockton (2-0): It is good for high school football in Massachusetts when these two programs are both playing well and competitive. Both teams enter this game at 2-0 and both head coaches are looking at this game as a litmus test for their teams are right now. For Xaverian, it is all about maintaining the momentum they have built with wins over B..C High and Malden Catholic. For Brockton, it is more of a legitimacy thing. The Boxers want to prove they are still a legitimate program despite being 2-0. I expect a good game as usual between these teams but it is hard to pick against the X right now.

#19 King Philip (2-0) at #15 Milford (1-1): The Hawks went toe to toe with Mansfield last week so they will be confident as they head into their showdown with KP. The Warriors are young and they have had to battle to beat Taunton and Attleboro. Milford presents a stiff test but KP has been there before so they will be up to the task. This will truly be a contrast in styles. The high flying Milford offense versus the ground and pound Warriors. Maximizing offensive possessions will be key in this game. Both defenses are good.

#17 St. John’s Shrewsbury (0-1) at #13 B.C High (1-1): The Pioneers were suppose to play Xaverian last week but had COVID issues. Now they get to travel east again to battle a B.C High team coming off of a big road win at the Prep. This has the potential to be a high scoring game. The Eagles are going to have to run the football and control the clock. If they can do that and keep the explosive St. John’s offense off the field, they will be in good shape, For the second straight week, John Brillo’s team plays a team that is young and that could once again play in B.C High’s favor.

Framingham (1-0) at #7 Wellesley (2-0):  Wellesley beat Newton North and Needham by a combined score of 82-0. The Raiders are very good so needless to say, Framingham will have their hands full. I wouldn’t however count out Ed Mantie’s Flyers Framingham is a much improved program and has the skill talent to score and make this game competitive. The question. Can the Framingham defense stop Wellesley’s multi-faceted spread offense. No one has thus far and that is a problem. Framingham quarterback Cody Coleman is one of the best dual threat quarterbacks in the state and this will be a big stage for him to shine.