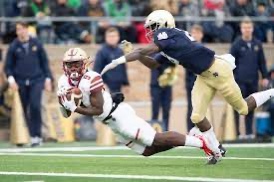 As if the BC wide receiver group couldn’t get much better, Kobay White has returned.

While the speedy playmaker isn’t quite ready to go at things 100%, his mere presence around Fish Field house and in the meeting rooms can’t be understated. A veteran and a leader, White saw his season some to an end just days into camp last season. On Wednesday morning, White met with the media for the first time since the injury and touched on a number of different things…

Since we hadn’t really heard from Kobay in over a year, White explained how the injury happened and his immediate thought process.

“It was the second day of camp…we weren’t going full speed and I jumped up for a ball, kind of landed on it wrong and that was it,” White explained. “At first I didn’t really know what it was, It was a partially torn ACL. I tried coming back, playing on it a little bit and it was too bad so I decided to have the surgery.”

HAVING TO WATCH LAST SEASON

“I wouldn’t say it was frustrating, it was actually the complete opposite,” White said when asked how hard it was to watch as the offense turned into a legitimate threat with Jurkovec under center. I knew I was coming back, so being able to see what the offense was doing and turning into really kind of got me pumped up to come back. It was keeping my hopes up definitely.

“In the beginning it was tough…you see how it went for us throwing the ball, so I was really looking forward to that and coach Hafley said it was something we’d do more of when I decided to stay. Obviously, I was really looking forward to that and it was tough but I had great support. My teammates, the coaches, my family, they really rallied behind me and made sure I always had a positive mind set and positive thoughts all around. It was definitely tough (early on) but each day is getting easier, especially as I start to do more stuff and start to actually feel more like a football player again.”

THE DEPTH AT WIDE RECEIVER

Lewis was one of the guys who burst onto the scene last year in White’s absence with some highlight reel catches. White believes Lewis is just one of the many reasons BC’s offense could be so dangerous this year.

“Cj kind of had the same thing as me,” White said. “I knew what CJ could do. He’s been a really good friend of mine for quite a while now and I felt this past season he was going to have his breakout year. He was having a great camp (in 2019) and then like a week or two before the season he ends up getting hurt, kind of like what happened to me.

“When last season came and I got hurt and I was in the receivers room, I had no doubt that (the other receivers) were going to pick it up, there would be no drop off. Seeing Cj have the year he had was probably one of the best feelings. Getting hurt the season before when he was supposed to have his breakout year, seeing all that work finally pay off, it’s a real good feeling.”

TALKING TO HIS FAVORITE NFL RECEIVER AND TIPS FROM ANTONIO BROWN

Last season, Zay Flowers revealed that he had worked out and talked with one of the best wide receivers in the NFL, Antonio Brown. On Wednesday, White talked about what he was able to take from Flowers and those meetings as well as who he’s tried to model his game after during his high school and college career.

“We were actually having Zoom meetings at the time,” White said. “We had just went home, we had only been in spring ball for like five days. Zay would come on to Zoom meetings in the morning and talk to us about how he worked out with Antonio Brown and would give us all tips. He was sharing with the room and we were all learning something, even our coach.

“We even had the luxury of having Doug Baldwin come talk to us. He was my favorite receiver when he retired and that’s somebody…if I had to pick a receiver I kind of modeled myself after or who’s game I like the most, it would be Doug Baldwin for sure.”