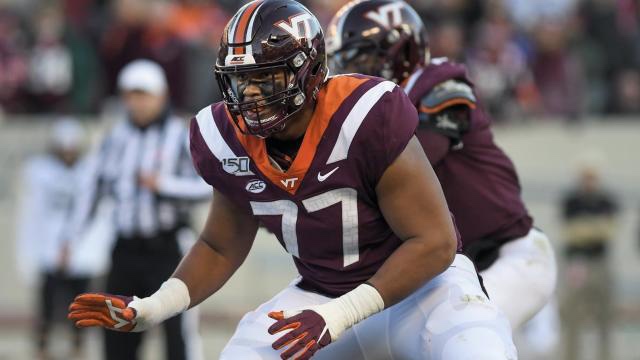 The Patriots have invested heavily in their offensive line in recent years both in terms of draft capital and money spent on re-signing players.

The Patriots have drafted 14 offensive lineman since 2014. Bill Belichick’s investment has on the offensive line has paid off with some key players emerging as impact starters. Shaq Mason, Joe Thuney immediately come to mind as do two of last year’s picks, Michael Onwenu and Justin Herron. 2018 first round pick Isaiah Wynn has been good when he’s healthy but he needs to stay on the field. Injuries have been an issue and the Patriots are debating whether or not to pick up his fifth year option.

Long time legendary offensive line coach Dante Scarnecchia was the primary draft evaluator of the offensive line for years but he has since retired. Despite that, the Patriots look for many of the same traits in offensive lineman today.

Virginia Tech offensive tackle Christian Darrisaw is a player Scarnecchia would like. At 6-5 313, he has the size and athleticism the Patriots look for at left tackle.

He is an athletic tackle who plays with a mean streak and profiles strictly as a left tackle.

Here is my scouting report on Christian Darrisaw

Initial Quickness: Darrisaw gets out of his stance quickly and can get inside hand placement on a defender. Beats defensive lineman to the point and establishes position.

Run Blocker: Technically sound. Plays with good leverage and balance. Moves well laterally and vertically. Has a tendency to play a little high at times. Needs to play with more power on double team blocks and scoop blocks.

Pull & Trap: Darrisaw moves well laterally and has shown he has the quickness necessary to pull on counter and dart plays and get up the hole consistently. Adjusts well in space and has shown he can connect with a moving target and sustain a block.

Hands: Darrisaw does a good job of getting inside hand placement on defenders but he is far from heavy handed and doesn’t shock defenders like you want out of an offensive lineman.

Strength: Darrisaw plays with good power at the point of attack but he is far from a mailer. Displays a good blend of power and athleticism.

Explosion: Darrisaw is explosive in short areas and can beat defenders to a spot. Plays with decent bend and consistently finishes his blocks.

Darrisaw is a great scheme fit for the Patriots. With Trent Brown on a one year deal and the uncertainty of Isaiah Wynn and his fifth year option, the Patriots could conceivably go offensive tackle at pick 15 or later.

Darrisaw needs to clean up some stuff fundamentally, most notably playing with better leverage and bend. That’s an easy fix. He would make a lot of sense for the Patriots at pick 15.