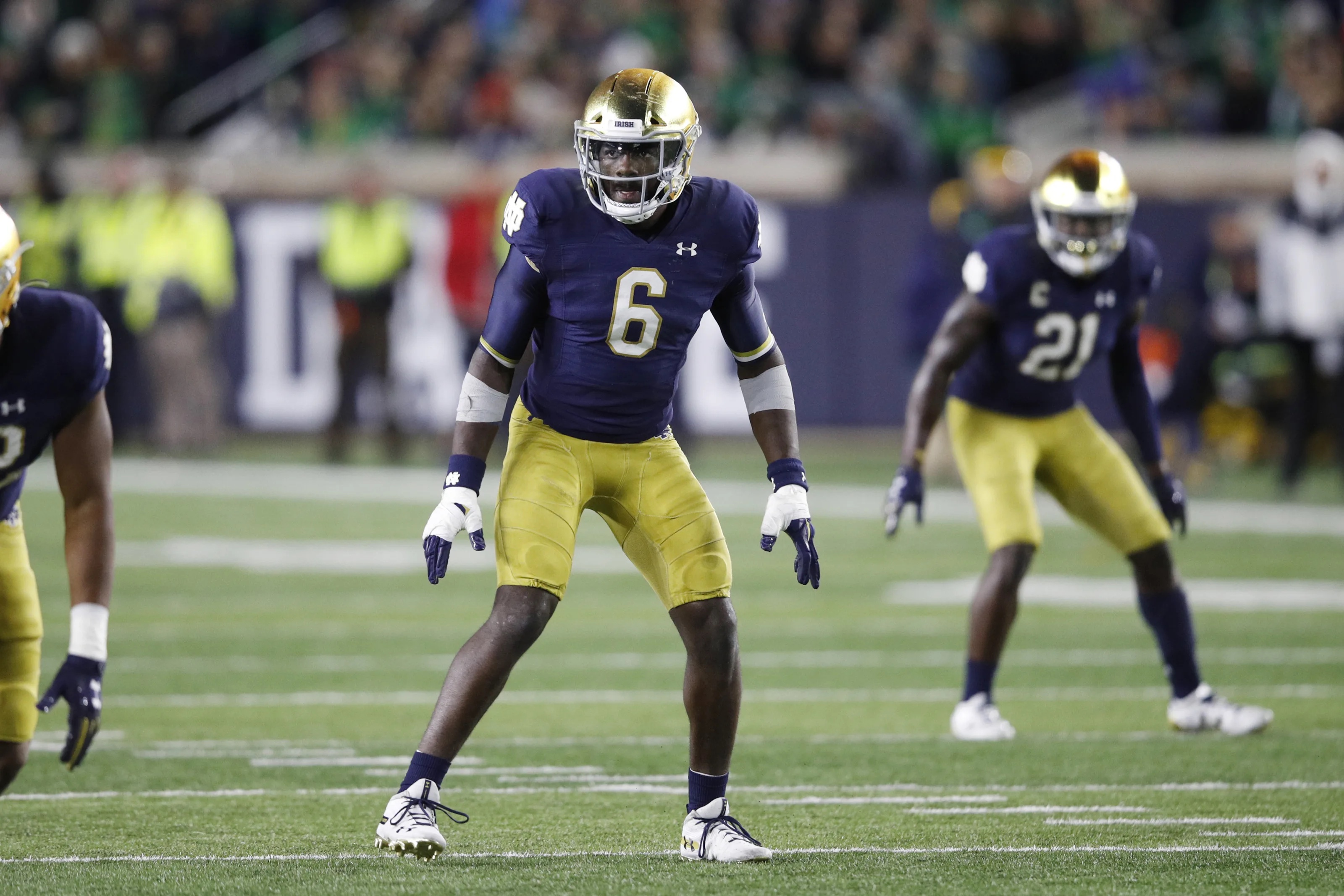 Versatility is the name of the game defensively today in the NFL. Now more than ever, you need linebackers and safeties that can match up and give you the flexibility to be aggressive defensively.

Defenders that can play three positions, at three levels and for three downs are in demand these days. I call them 3X3 players. We saw it in last year’s draft with Isaiah Simmons, Jeremy Chinn and Kyle Duggar all getting drafted in the first two rounds. All three guys are hybrid linebacker, safety types who can play in all situations and align all over the place.

With spread offenses in vogue now at every level of football, you need to be able to match up defensively. A player like Notre Dane’s Jeremiah Owusu-Koramoah could come in handy.

Here is my scouting report on Jeremiah Owusu-Koramoah.

Vs. Inside Run: Koramoah is not afraid to mix it up inside the tackles. He is more effective however blitzing from a depth alignment. Despite his size, he has shown a willingness to step up and take on blockers. He does have a tendency to run around blocks or “Olay” them at times.

Vs. Outside Run: Koramoah moves well laterally. Does a good job of identifying full outside flow and getting a jump on the ball. Stays square and does a good job of beating blockers to the point and working through blocks.

Blitz/Pass Rush: A pure speed rusher who is affective blitzing from depth or on the line. Explosive. Gets a jump on offensive tackles and puts them on their heels. Wins with speed, lean and balance. Needs to be more refined as a pass rusher especially when hand fighting.

Key & Diagnose: Instinctive. Recognizes plays quickly and can process where the ball is going. Does a great job of identifying route combinations in zone coverage and matching up. Seemingly never out of position.

Tackling: A physical tackler who closes quickly, breaks down and wraps. Takes good angles and can beat ball carriers to a spot. Super aggressive at times and can over run plays.

Pass Drops: Fluid. Koramoah is a rhythmic athlete who doesn’t waste motion. Gets depth on zone drops and does a good job of positioning himself in areas the quarterback wants to throw to.

Pass Coverage: Koramoah can play in all three levels in coverage. He has the athleticism necessary to match up with receivers in the slot or tight ends and can carry routes vertically. Plays with great instincts in coverage and shows an ability to drive on the ball and break up passes.

Kormoah is a chess piece that can be moved around on the field and used in different ways. No one uses players like Kormoah quite like Bill Belichick does and that is why he would be a great scheme fit.